Lys has been grabbed by a Weiroo. This Weiroo gets a spear in the back and a bullet through it’s wing but still manages to fly on. Even when Lys stabs it does it still go on. Only it is weak and Lys manages to get out of it’s grasp. She finds herself on the Plain of Fire and the Weiroo is determined to bring her back. While they are fighting, See-ta comes riding on a triceratops. She uses a mushroom that has acid in it to kill the Weiroo. Bowen and Co-tan also come and everybody greets one another. See-ta will continue on to her swamp as Bowen and Lys accompany Co-tan back to the Galus. We then skip to 1950 where Bowen and Lys are telling the story to Jason Gridley. He is about to leave for Pellucidar.

This was a great little story that fills in the time of Bowen and Lys in Caspak before they came to the Galus. It also introduces how they met See-ta. The artist really did an excellent job on the Weiroo. They look so creepy and were some tough suckers. Ends with notes that these adventures continue in new books about Pellucidar and Caspak. I really have to check out these books some day. American Mythology is really accomplishing stuff with Burrough’s creations. Am anxiously waiting for the other series coming out.

Bowen Tyler is a prisoner of the Alus. They want him to teach how to fire his rifle. So they put a baby dinosaur out to lure in a sabretooth. Then Bowen is pushed off a cliff. He has no choice but to use the rifle and fires. He misses but the noise scars the sabretooth away. Just then a tribe of Band-lu attack and take Bowen prisoner. Now they want Bowen to show them how to use the rifle.

Lys and Co-tan hear the shot while being confronted by See-ta on her dinosaur. See-ta wants to know what happened to the baby dinosaur of the one she rides. Lys and Co-tan run off in the direction of the gunshot. They come on Alus and Band-lu fighting. See-ta also joins because the Band-lu have the baby dinosaur. Lys manages to grab a pistol and save Bowen. As Co-tan is introduced, Lys is grabbed by a Weiroo.

This was a very fast paced story. Yet it flowed nicely and was easy to follow. The Alus and Band-lu were pretty dumb which is how I could imagine Burroughs portraying them. A fun story with another cliffhanger ending.

Bowen Tyler and Lys La Rouge have just thrown the thermos with their message into the ocean. Now they wander Caspak looking for their friends. They run into a pack of hyenas and run into a giant spider. They survive this but are later attacked by the Alus while crossing a river. Lys gets separated from Bowen. She does run into a woman being attacked by the Alus. Lys helps her defeat her attackers and finds out she is a Galu named Co-tan. Co-tan agrees to help Lys track down the Alus that took Bowen. The trail leads through a swamp and the two are confronted by See-ta the cursed riding a brontosaurus.

Another entry in the Land That Time Forgot. This one is the story of how Bowen and Lys met See-ta. It also brings in another Burroughs character in Co-tan from the third book in the series. Like all of Wolfer’s stories this is a tightly written and fast paced adventure. Told with a minimum of dialogue or exposition we get an entertaining story. This fells like a Burroughs story and I am enjoying this origin of a popular character from the comic series.

Abby and Ethan are making their way back to Caspak through the passages between Pellucidar and the surface. They talk about what they miss the most. The Horibs are following and they come on a chamber full of portals. With the Horibs closing in they take a gamble and jump through one. It deposits them in the lake just next to the U-33. They are captured by Von Schoenvorts. Soon after the Horibs also come and attack the sub. They manage to take it over. The Germans along with Abby and Ethan abandon the sub and make it to the shore. Now the Germans are trapped without their sub and must form an alliance with Abby and her group.

So the big four issue crossover to introduce the new shared universe of Burroughs comes to an end. It ends where it started and I found it quite satisfying. Ethan manages in a sweet way to confess his love to Abby. A bit of humor when the two introduce themselves as Arnold Schwartzenegger and Kate Beckinsdale. So now they must form an alliance with the Germans which I think will lead to some interesting future stories.

As for the other worlds they left plenty of loose threads for stories there too. Already we have a Carson of Venus out. A Moon Maid one is coming. Some others are a Princess of Venus series and a John Carter/Carson of Venus crossover. So I guess the Barsoom world is joining the lineup. I think American Mythology has done an excellent job of resurrecting Burrough’s works.

See-ta the outcast Ga-lu woman notices that the plains are dying. The smaller animals are eating all the grass. She comes on a Weiroo talking with a Sto-lu. She finds out that the Sto-lu under the directions of the Weiroo are destroying the eggs of the T-rex. This is causing the smaller animals to come from the mountains and overeat the grass. This is killing off the food that the Sto-lu eat which are the little horses. See-Ta confronts the Weiroo and finds out they want the T-rex gone so more Sto-lu can come up and produce Ga-lu females which are the only way the Weiroo can reproduce. A flashback revels that See-Ta was an offering for the Weiroo and the only female to resist. For this she was banished from her tribe.

So she exposes the Weiroo and gets the Sto-lu to revolt. Later a Mahar comes and tells her that they are behind the plot to eliminate the T-rex. Seems they are the only danger to their planned conquest of Caspak. A Sto-lu chops the Mahar’s head off. Thus the balance of Caspak is restored.

An interesting story. This one gives us some backstory to See-Ta and why she was banished by her tribe. A beautiful drawn issue with a minimum of words. Wolfer shows himself a talented artist as well as writer. The Weiroo look very much frightful creatures. The alliance with the Mahars is also revealed. I see he does take some liberties with the Mahars as others who have adapted them in comics. They are able to communicate telepathically with humans when Burroughs made it clear that they communicated through an unknown language beyond human understanding. An excellent story that gives more insight into Caspak.

Abby and the others manage to escape the pterodactyls at the plain of fire and meet up with See-ta and Ethan. At a cave the group plans their assault on the German’s camp. They use blood from a dinosaur and throw it at the U-33. This causes the saurians in the river to attack. Abby and her group manage to steal back the mini-subs. Only Von Schoenvorts fires a torpedo at them. It misses but closes off the underwater passage. So Abby and the survivors find a place to settle down.

The third was a quick story. Tyler finds out that they are from the future but still doesn’t know about Abby’s heritage. A story that I think moved too quickly but good news in that Caspak will continue. So leaves open more exciting adventures. Curious how this will affect the future. 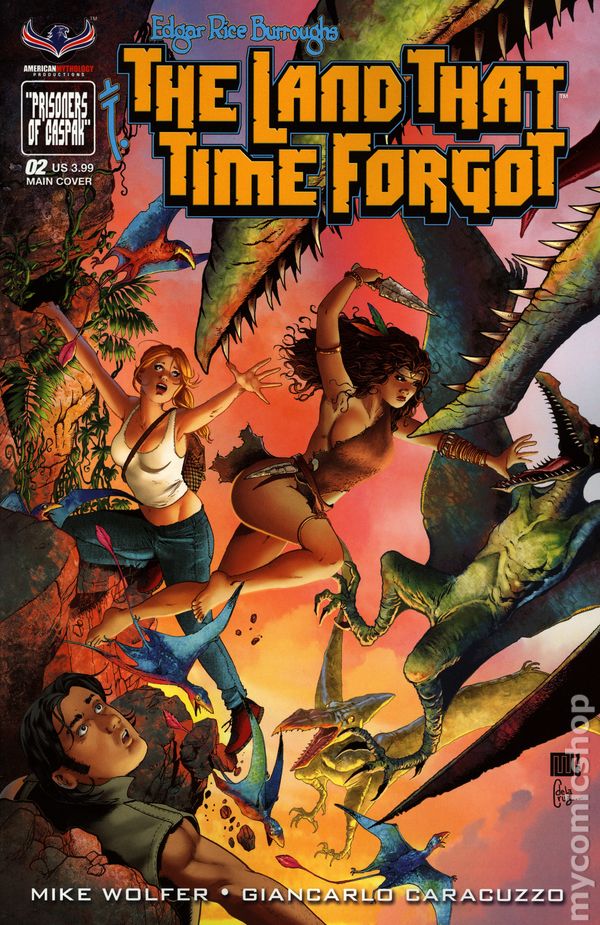 Abby and the expedition have met her great-great-great grandparents Bowen Tyler and Lys La Rue. Bowen comes up with a plan to escape. Just then dinosaurs show up attracted to the triceratops corpse. The groups scatters with instructions to head west to the Plain of Fire. One gets eaten but the others make it. A Galu woman that was captive of Von Schoenvorts manages to jump off the sub and escape as it is attacked by a dinosaur. She meets up with Bradley. Von Schoenvorts takes the mini-submarines. Abby and her crew debate the ramifications of going back in time and decide not to tell Bowen and Lys that they are from the future. It ends with them being attacked by pterodactyls.

“Inside the Land That Time Forgot”
By Mike Wolfer

An article by the writer on his time as a kid in the seventies. He had to use the power of imagination with his friends in those primitive times. Brings back a lot of memories. Also includes his receipt for a cheese sandwich and a portfolio of alternate covers.

So this issue finds Abby and crew trying to survive the perils of Caspak. They also decide not to tell that they are from the future. My question is did they travel back in time or is Caspak an island that exists outside of time. An enjoyable series so far.

Abby Tyler the great-great-great granddaughter of Bowen and Lys Tyler is now the head of the family business in 2015. She recruits the great-great-great grandson of Bradley to go on an expedition to find Caprona. Abby believes the island sank and has a ship with modern mini-subs to explore the ocean floor. Everyone is surprised that the island actually exists. All radio and satellite communications cease. So the expedition takes two mini-subs and goes exploring. They find the underwater tunnel and emerge in Caspak. They are startled by a triceratops and are further startled when a caveman jumps out urging them not to fire. Even more startled when the deck gun from the U-33 takes out the triceratops. On deck is Von Schoenvorts who greets Mr. Tyler.

“Inside the Land That Time Forgot”
By Mike Wolfer

An article by the writer on how he became a fan of the series at a young age. What he plans to do. Also a biography of everyone involved with the issue. At the end a sketchbook of the characters.

So a series based on Edgar Rice Burroughs Caspak series. Only it is set in the modern world. With the ancestors of the original cast coming back. It also looks like they traveled back in time and are meeting their great-great-great grandparents. Wow what a concept. I am a fan of the series and am quite intrigued by this story. American Mythology has resurrected some of Burroughs lesser known worlds and I think its about time a comic explored these worlds. Looking forward to exploring what they have put out so far.