The Xataxian is under attack by the Tharks. Dejah, her grandfather and Dekana are the only ones left. When it looks like the end old Sajad comes riding in on a malagor. He can only take one and takes the wounded Tardos Mors. After he leaves than Dejah attacks Dekana for she knows that she was part of the conspiracy. They fight and at the end Dejah is rescued by her friend Xahar who is dying from her wounds. Dekana falls to her death and now Dejah has no choice but to surrender to the victorious Tharks who manage to board the ship as it crashes to the ground. They loot the ship and take Dejah captive. It is here she hears of the mysterious stranger from Jasoom.

So the final issue in the series wraps everything up nicely. Dejah gets to take care of Dekana who she never liked or trusted. At the end she is prisoner of the Tharks which is how she first met John Carter in the very first book A Princess of Mars. A cool idea to give us the backstory to the scientific expedition that Dejah was on. An interesting story to something that was probably assumed to be a dull scientific expedition. I do love Dejah and Dynamite has been giving her plenty of quality stories.

The Black Pirates have captured the Xataxian but its captain Keel has a plan. He is going to sacrifice himself by blowing the doors to the pirate ship open. Dejah goes to rescue her grandfather. Tardos Mors is wounded and passes out. The traitor Ando Norak then seems pleased for now the Jeddak’s lover Dekana can release him. They are in league but Dekana decides to end it by stabbing Ando. When Dejah arrives she claims that he escaped and tried to kill the Jeddak.

So Keel succeeds and blows the doors open allowing the Xataxian to escape. Only now the ship is fast loosing altitude as its buoyancy tanks are empty. And to make matters worst the Tharks are waiting for the doomed ship to fall.

Another fast moving issue. It goes so fast I am a bit confused as to how they escaped so easily. Also we finally learn that Dejah has reason to not trust Dekana. Yet we still don’t know what her ulterior motives where in allying with the traitor Ando Norak. Hopefully all will be revealed in the final issue. 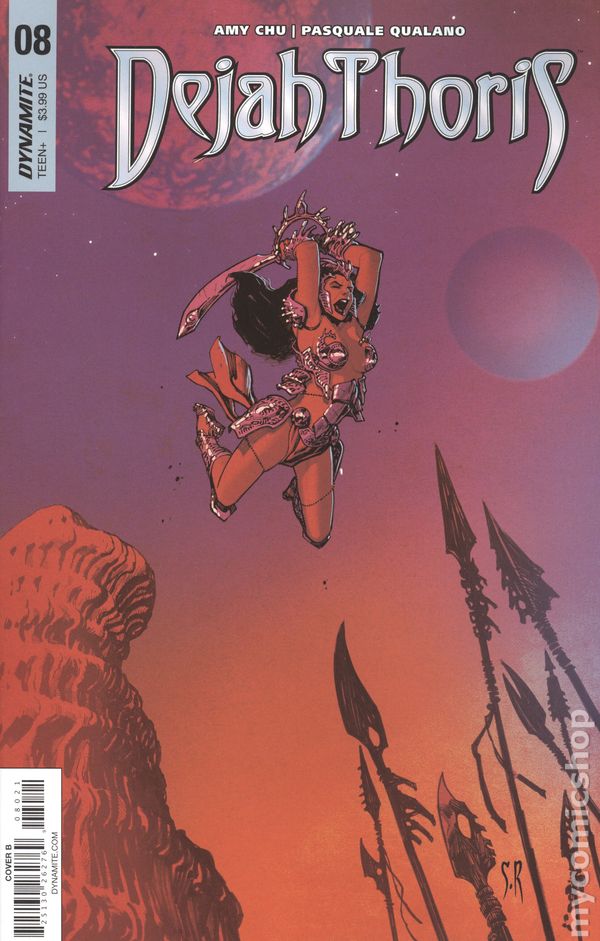 A giant black pirate ship is about to capture the Xatatian. They manage to evacuate most of the crew before the ship is swallowed up. In meeting with the blacks the Jeddak finds out that they want the radium cannons and the traitorous architect Ando Norak. The black pirates are also allied with the Zodangans. Naturally Tardos Mors refuses and the crew prepares to fight. They plant radium bombs and set a trap with nets for the attacking pirates.

Another interesting development in the story. The black pirates have made an appearance and are allied with Helium’s enemy Zodanga. The artist portrays the blacks as over eight feet tall which I don’t remember from the original books. The story is fast paced and goes quickly which is not necessarily a bad thing.

Dejah and Keel Kors are searching for the assassin. Dejah studies the plans and notices that there seems to be a secret space in the bottom of the ship. They explore there and find the assassin. It is Ando Norak the architect of the ship. He is angry at the corruption of Helium and claims to control the 8th ray buoyancy tanks. At the end the ship is attacked by the Black Pirates of Barsoom.

So some more interesting developments. We find out the assassin who has control of the ship. Keel Kors is hopelessly in love with Dejah. It ends with introducing the Black Pirates. This was a short and sedate issue but did set up to move the story into more exciting action. 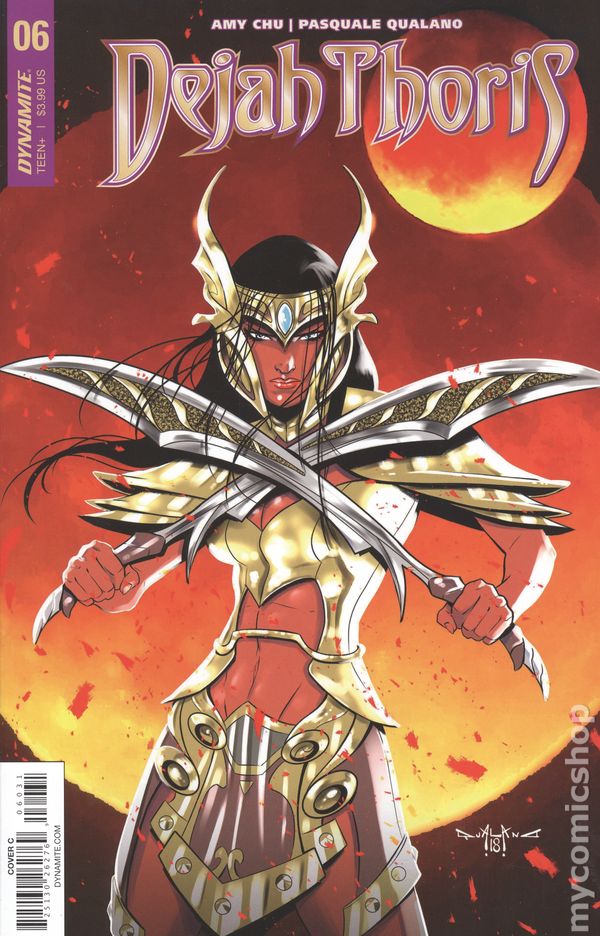 In the city of Hastor the Xataxian the largest ship ever build is being launched. It is going on a scientific expedition to chart the atmosphere. We are introduced to the captain Keel Kors, prince of Hastor. The ceremony is interrupted by a Zodangan assassin that throws a bomb. He is then killed by Dekana the administrator of the Royal Academy.

Later Dejah is given a tour of the ship on its maiden voyage. She finds it loaded with weapons as Keel explains there are many dangers they may encounter. While sleeping Dejah is awakened by a sorak and meets Keel who is still up. Just then another Zodangian assassin strikes but the sorak attacks and drives him away. The blood trail leads to Dekana’s chamber. Dejah finds her in bed with his grandfather. Her grandfather take Dejah for a walk and shows her giant radium cannons that are going to destroy the Zodangian fleet.

So we are introduced to the second story line. Two characters that seem central. Dekana who is sleeping around with the Jeddak and someone Dejah doesn’t seem to like. The other is Captain Keel who is obviously infatuated with Dejah. The Zodangians are clearly out to kill the royal family and the scientific mission has an ulterior motive. Lots of intrigue and mystery so far.

Dejah and her companions Sajad and Kajas are trapped in an underground cavern filling with water. It looks like they will drown but the Jeddak of Thurd Nars Jartas comes to the rescue. He didn’t abandon them and is on a Malagor a flying reptile thought extinct. He manages to pull them out. He did it for more practical terms. The water machine they activated is causing the city of Thurd to be swallowed. He needs Dejah and her companions to find a way to stop the water or his people are doomed. Dejah decides that the machine must be destroyed and Nars makes the ultimate sacrifice. He jumps in with explosives that blow up the machine and stop the water. Later the fleet from Helium arrives to rescue Dejah. She lost the water machine but knows the technology exists. At the end she is offered the chance to lead a scientific expedition to study the atmosphere.

So we come to the end of a story arc and the beginning of another. Dejah sadly lost the technology but her friend Kajas salvaged a piece of the machine. The green Jeddak Nars proved to be a man of honor and rescued Dejah and sacrificed himself for his people. Dejah is learning the meaning of being a leader. It now gets us into the atmospheric expedition that will eventually lead her to the fateful meeting with John Carter.

The Jeddak of Thurd leads Dejah and her companions to a large hole. He claims it leads to Ephysium. So they climb down and find an ancient chamber with an image of the Tree of Life on the ceiling. After blowing a hole in the wall with a radium bomb they find an underground reservoir. It appears Dejah has found the mythical city of Ephysium. While frolicking in the water Kajas is attacked by a giant creature. Dejah and Sajad rescue her. Then they notice the green men have left. A quake starts and they find the water level rising.

So it looks like they found the lost city. An underground reservoir has a huge creature and plenty of mystery. Ends on a cliffhanger which I am looking forward to its outcome. So far the story continues to interest me. I would like to see where this leads. 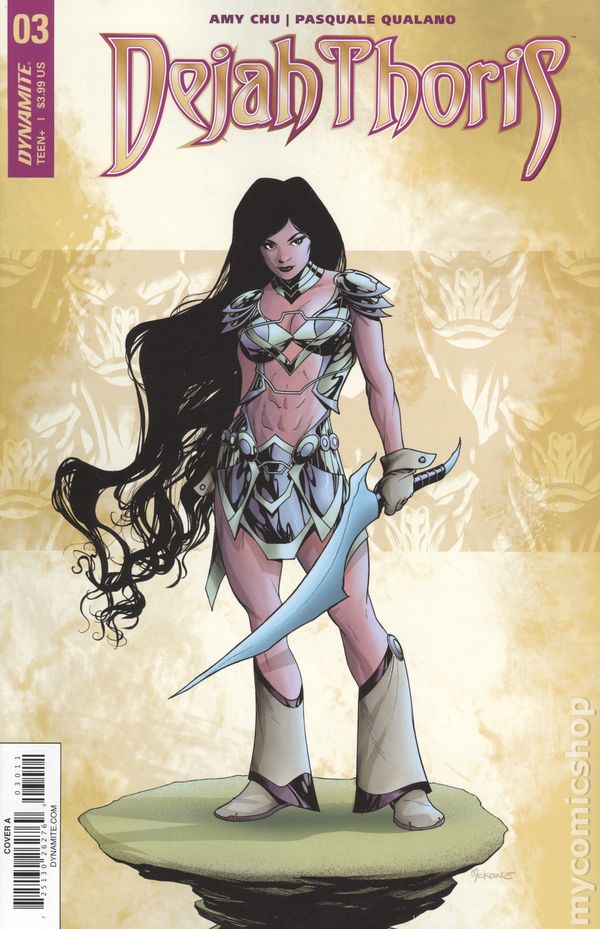 Dejah is now a prisoner of the Jeddak of Thurd. The Jeddak turns out to be the green warrior that Dejah helped escape from prison. He is grateful but doesn’t want to let her go for fear of revealing that Thurd is not uninhabited. The city is home to the castoffs of the green tribes. The Jeddak does confirm that he knows the location of Ephysium and makes a deal. A game of Jetan the Martian chess. If he wins then Dejah stays with him and if Dejah wins then he will tell her the location of Ephysium.

The game is played using live players as the pieces. The green warriors for the jeddak and captive red martians for Dejah. The jeddak cheats so Dejah manages to grab the guards knife and take the jeddak prisoner. He agrees to show Dejah the location of Ephysium which is the city that they are located in.

So we get some backstory on the Jeddak of Thurd and find out the location of the fabled city of Ephysium. I love the idea of live players in Jetan. A very Burrough’s idea. Unfortunately this was not handled very well in the story. We never get shown any of the play and it felt like something was missing in the story. It just jumps from some unknown trick to Dejah managing to take the Jeddak hostage. Otherwise a good story.

A great white ape is attacking Dejah and her party. It kills the other male student that she brought along before Dejah and her bodyguard Sajad dispatch it. So the three survivors continue on in the search for Ephysium. After a long walk they make it to the valley of Otz. The two girls do some research and are attacked by plant men. A ship rescues them but instead of it belonging to Helium, it is crewed by green men. They take the three to the city of Thurd. Dejah meets the jeddak Nars Jartas. The Thark warrior that Dejah helped escape from execution.

So Dejah gets a valuable lesson in life. Being a leader can get your followers killed. What was to be a simple peaceful expedition turns very deadly for some poor students. The issue had some interesting action with fights with a giant white ape and plant men. A mysterious city where members of both the Thark and Warhoon have joined together. And the return of the green man that Dejah helped escape. An interesting story. 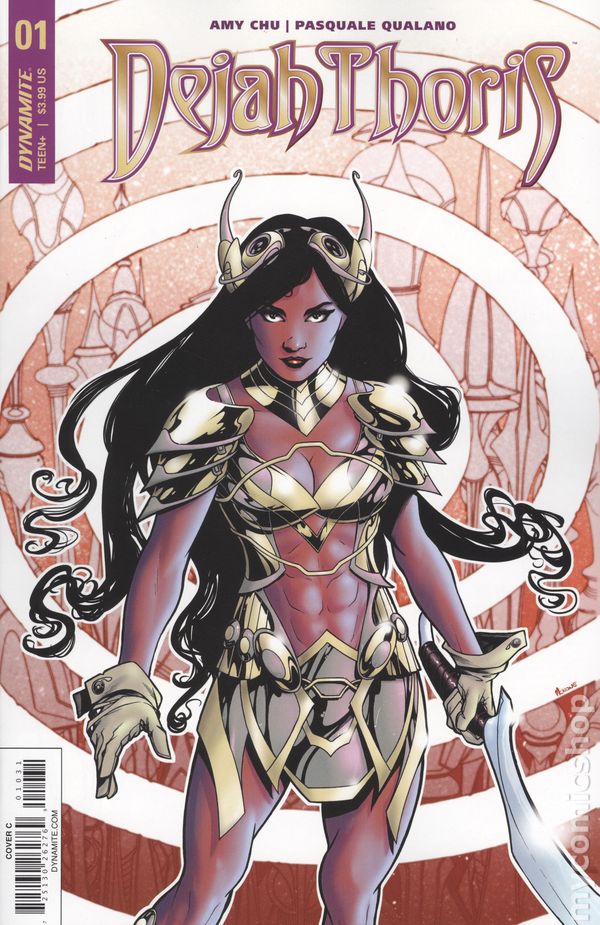 Dejah is still obsessed with finding the lost city of Ephesyium. Her tutor insists its a myth. Yet she approaches the Royal Academy for help. She gets three young students assigned to help her. She tries to take a flyer and start her search but her father stops her. So she decides to set out on thoat the Martian horse. With her three students they ride out into the harsh Barsoomian desert. Soon they attract the attention of two banths the Martian equivalent to lions. Dejah manages to kill one with her sword but two may be too much to handle. Already the banths have killed one of her students. Fortunately her old body guard Sajad Surma arrives in time. He kills the other banth but soon after the group must face the rampage of a great white ape.

So the series starts off with a quest by a petulant princess. Dejah is obsessed with finding the lost city believing that it will save Barsoom. The comics definitely give Dejah more personality than Burroughs did. She is a warrior which in the comics all women are. A big departure from Burrough’s Barsoom. The issue also shows the dangers of Barsoom. I am not real enamored with the armor that the artist decided to give Dejah. It is clunky and not what Barsoomians wear. Still a minor quibble for a good start to a series.