The domies are starting to mutate into actual vampires with fangs as our two astronaut heroes assault the dome to rescue their wives. They manage to get an old air force jet and crash it into the dome. Parachuting out armed with pistols, grenades and a bazooka they start killing the vampires by the truckload. The astronaut Craig is too late and finds his wife already drained. Captain Ballard manages to rescue his wife and kill the leader. Craig is despondent and stays behind as Ballard and Elissa fly off in a captured aircraft. The two wind up in Los Angeles and are attacked by giant bloodsucking spiders. Apparently all life on the planet has been mutating into vampire like creatures. Elissa dies leaving a despondent Ballard to wallow in grief.

And so ends this brief series. Atlas comics the fly by night operation went out of business before a fourth issue entitled “The Secret Project!” could be released. So we’re left to wonder about the fate of this vampire planet that Earth has become in the far future of 2010. I enjoyed this series. It had a great and unique premises that I would have liked to seen explored further. Surprised it wasn’t picked up by another company later on. A good series with potential that was unfortunately destined for obscurity. 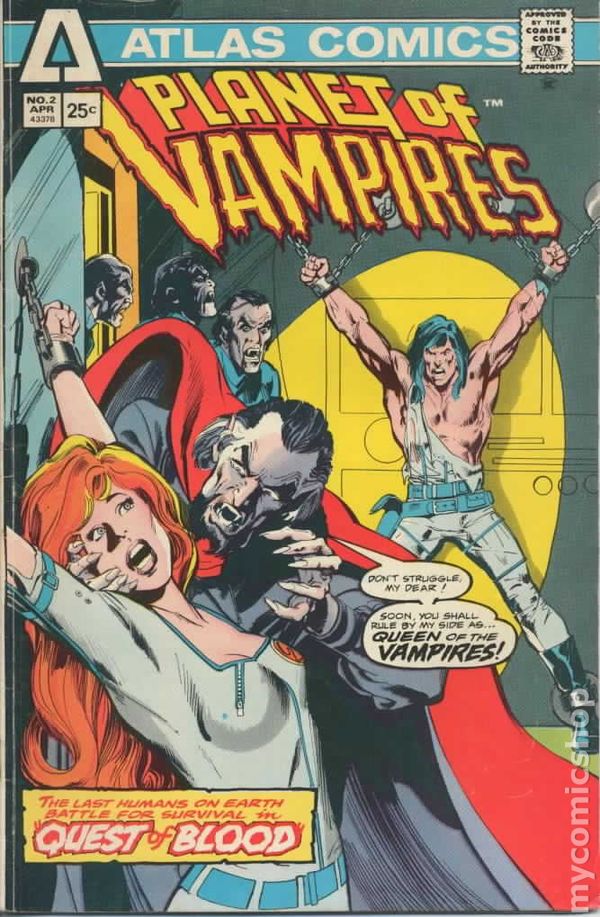 The story finds Captain Gallant and his wife captive of a gang outside the dome. The man they helped rescue has challenged the leader to fight for the leadership. He wins and Gallant is able to persuade him to unite the warring gangs against the vampires of the dome. Joined by their astronaut compatriots another couple, Gallant manages to destroy pursuing vampire floaters when they set a trap by detonating the atomic reactor on their captured floater. This convinces the other tribes that they can band together but are too late. The Domies attack in force and their superior firepower wins the day. The two female astronauts are captured to mate with the vampire leader. The husbands vow to destroy the vampires.

The second book continues to set up the vampire world. I love the plans of Gallant. He wants the gangs to salvage parts from airports and build fighter jets. Real ambitious for street gangs. Also the cover is a bit misleading. It has the vampires as Dracula when in fact the vampires are normal humans. Humans that need blood but do not in any way look like Dracula. A really interesting concept for a comic book.

It is the far future of 2010 and the Ares VII mission is returning from its five year mission to Mars. Getting no answer from Earth the crew splash down off Coney Island in New York. There the crew is attacked by savages and one of their number killed but the other four are saved by a floater from the domed city. The ‘Domies’ as the inhabitants of a futuristic domed city in Manhattan are called take the survivors inside. At first the crew is relieved that there is still civilization after a nuclear war destroyed the planet.

But there is a sinister side to the city. The crew finds that the Domies are taking the savages and bleeding them dry in a mechanized assembly line. The savages outside have developed immunities to the diseases while the Domies are not immune. Thus they use the savages blood to drink and are in effect vampires. The crew free the captives and in a gun battle escape the domed city. But a hostile gang of savages awaits them outside.

The first in a short lived series from Atlas comics. Atlas was a company formed by a disgruntled former founder of Marvel who was unhappy his son was fired from Marvel so decided to form a rival company. Well history shows that Marvel clearly came out on top. This series is a fascinating idea. God am I old. I remember when 2010 was a long way into the future. A future that envisioned a mission to Mars and black men that still wore Afros and talked jive. Amusing how it turned out. The story is a blend of “Planet of the Apes”, “Omega Man” and a Hammer horror film. Surprised that this title was never revived.