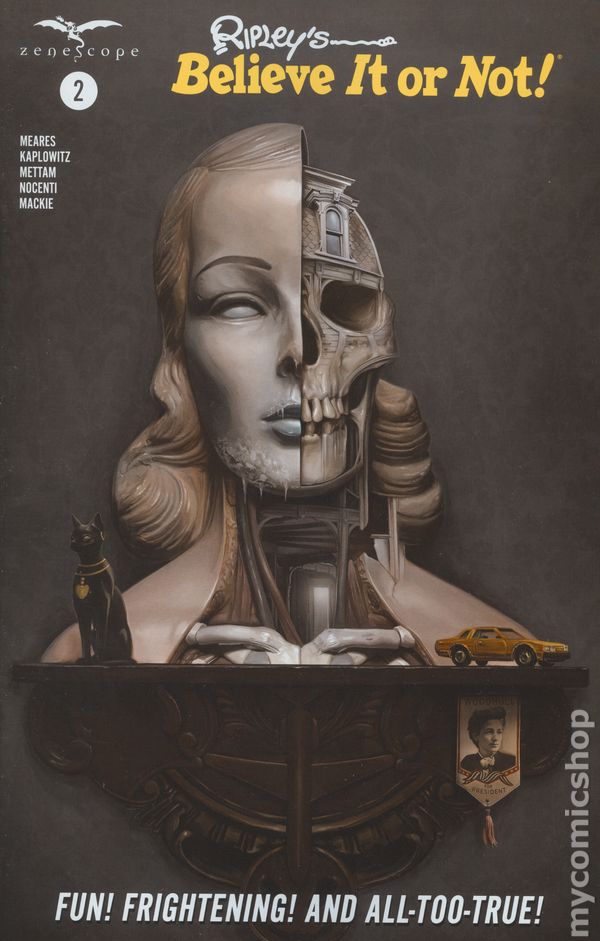 A husband and his wife are visiting the odditorium in Hollywood. The man wants to leave but does start to get interested in the displays.

525 B.C. the Persian king is offended when the Egyptian king sends an imposter instead of his daughter for marriage. So he marches his army. At the battlefield the Persians ride around holding cats and threaten to kill them if the Egyptians don’t run away. They do run and the Persians conquer Egypt.

Fact Page
“Egyptians Lost a War Because They Loved Cats!” King Cambyses II persuaded his troops to carry into battle cats knowing the Egyptians reverence for them. Cats were worshipped due to their ability to hunt rats, cobras and other dangerous critters.
“Speaking of Dangerous Critters…” Robert Ripley owned a 28 foot-long boa constrictor named Gertie.

Upstate Minnesota 1980. A young girl leaves a bar and starts driving home in freezing weather. While changing the radio station she swerves to avoid hitting a rabbit and hits a tree. So she starts walking to find help. Just in front of a home she collapses and the owner finds her lying there. Taken to the hospital she is frozen so much that the needle breaks when they try to insert an IV. A doctor insists that they warm her up and she survives.

Fact Page
“A Woman was Frozen in Sub-zero Temperatures and Survived!”
December 20, 1980 Jean Hillard was found in 22 below weather frozen stiff. A heating blanket wrapped around her revived her and she made a full recovery.
“Here’s a Cold Hard Fact…” In 1936 11,000 boys were polled and Robert Ripley was the most popular man in American. J. Edgar Hoover came in second.

Liberty Jones is researching the DNA of Charles Byrne the Irish giant in the Hunter collection. Protesters want the giant to be buried at sea. For in the 1780’s the giant died and John Hunter who collected medical curiosities wanted his bones. So he hired some men to steal the bones and replace the coffin with sand.

Fact Page
“The Irish Giant” was 7’7″ tall and considered the tallest man at the time. His condition was caused by a tumor in the pituitary gland. His skeleton is on display at the Hunterian Museum in England and people are pushing for his skeleton to get a proper burial. Scientists have sequenced his DNA and are close to building an exact replica of his skeleton.
“From Big to Small!” Robert Ripley had a mummified baby named “Atta-boy” It was 6.5 inches and photographic evidence exists. The specimen is lost and is considered the holy grail of Ripley’s collection.

Two men are working on the Winchester mansion. The older one tells why it is being built. Sarah Winchester married the man who founded the Winchester gun company. After her husband and daughter died she turned to the occult. A medium told her she must build a place for the ghosts of those who where killed by a Winchester rifle. So she had a house continually being built.

Fact Page
“Sarah Winchester Build a House for Ghosts!” This house is claimed to be haunted. The house has 161 rooms and the number 13 in prevalent. Sarah died at 83 and left a will with thirteen sections each signed thirteen times.
“Is a Ripley Odditorium Haunted!” The one in Key West have accounts of a spectral girl running around.

In a bar in New York a man makes a comment on why people carve Jack O’Lanterns. The bartender tells the story of Stingy Jack. A man in Ireland who was always playing tricks on people but had the gift of gab and always had other people pay for his drinks. One day the devil comes to claim his soul and Jack asks for him to turn himself into a coin so he can buy his last drink. But Jack has a crucifix and the Devil can’t turn back. Jack gets an agreement that the Devil will not come for him for ten years. Later after ten years the Devil comes and Jack asks another favor. To retrieve an apple. Once in the tree Jack puts out holy symbols and gets an agreement that the Devil will never be admitted to Hell. So when he dies he can’t get into Heaven but the Devil will not let him in Hell. The Devil gives Jack an ember to light his way between the two. He carved a lantern in the turnip he was buried with and can only come to Earth on Halloween. So the Irish carved their own lanterns to keep his spirit away. When they came to America the pumpkin was an ideal fruit to use. At the end the man thanks the bartender and leaves in a cloud of smoke. For he was the devil.

Conclusion to the Framing Sequence

The guy who didn’t want to visit does not notice it is closing time. As he leaves he notices the hologram of Ripley wink at him.

So this two issue series of Believe It or Not! was very enjoyable. There was a lot of weird stories. It has inspired me to visit the one here at Wisconsin Dells sometime. I hope they do some more of these quirky issues.

A father and son are visiting the odditorium in Branson, Missouri. They listen to a speech by a hologram of Robert Ripley then explore the strange things.

A new maid drops the tea cup and hears a story from the woman of the mansion. A young boy Petrus Gonsalvus in the Canary Islands has a condition. He has thick hair all over his body. The inhabitants cage him and ship him off to Paris to amuse the nobles. King Henry II sees a soul in the young boy and takes him in. He educates him and he becomes a member of the court. When he grows up they find a young woman to be his wife. They have seven kids and some inherited the hair condition as the daughter that was telling the story.

Fact Page
“Beauty and the Beast” is based on a true story. Pedro Gonzales who became known as Petrus Gonsalvus suffered from the rare condition hypertrichosis which grows thick hair all over the body. He was the first known case and only fifty have been observed. He had seven children and three also had the condition.

San Francisco 1848. Phinneas Gage works for the railroad. An accident while blowing up a boulder drives a railroad spike through his head. Doctors manage to save Gage but his personality is different. He swears all the time and is mean. He gets fired from his job but gets another by being an attraction in a freak show.

Fact Page
“Phineas Gage survived after an iron rod was driven through his skull” His injury was very informative to modern neurology and is still being studied today. Gage’s personality returned to normal a few years later while driving a stagecoach.

“The First Ripley’s Odditorium” was opended at the Chicago World’s Fair in 1933. Beds were provided for patrons who fainted due to the shocking sights within.

A young man comes to an expert to lose weight to qualify to be a jockey. The old man tells a story of Buddy who he helped by sweating him in hot baths and copious does of laxatives. He loses twelve pounds and gets to race Gentle Touch. While racing the grim reaper chases him and touches him on the shoulder. Buddy wins but is soon discovered that he died. He still gets the win since there is no rules about being alive when you cross the finish line. No one will ride the horse again and it becomes known as the Gentle Touch of Death.

Fact Page
“A dead man won a horse race!” 1923 in New York Frank Hayes wins the race. The audience thought he was showboating when slumped over but died of a heart attack. His horse was named Sweet Kiss and no one would ride it. It became known as the Sweet Kiss of Death.

“Robert Ripley collected shrunken heads”. He bought his first head in Panama city. One head was mailed to him from Equador with the message “Please take care of this. I think it is on of my relatives.”

A man and his daughter leave a cabin to go hunting. The man tells the story of how a rainbow lake in the Yellowstone Caldera one day turned into a supervolcano. It covered the land with ash and people starved. At the end they come on the ash covered ruins of Las Vegas.

Fact Page
“The Yellowstone Supervolcano is due for an eruption!” Three eruptions have occurred in Yellowstone at 600,000 to 850,000 intervals. The last one was 640,000 years so we are due.

“Fire Sale!” Ripley tried to buy a newly formed volcano in Mexico but the government wouldn’t let him.

At a nursing home a new nurse is introduced to the therapy cat that knows when a person will die. The cat goes to them and lays with them as they die.

Fact Page
“A cat has correctly predicted 100 deaths!” Oscar a therapy cat at Steere House nursing in Rhode Island will take a nap by the person that soon dies. Doctors hypothesis that the cat can smell chemicals that are released when a person dies.

“That’s a Whole lotta Odd!” There are over 100 Ripley attractions in eleven countries worldwide.

Conclusion to the Framing Sequence.

After spending all day at the odditorium the boy and father leave. As they go the holographic image of Ripley gives the boy a wink. The boy comments that he believes it is a ghost and you can Believe It or Not!

I loved Ripley’s Believe it or Not! I remember fondly the old Gold Key issues. So when I saw a new series I had to check it out. It is still an enjoyable read. The new one is about more weird stuff than ghost stories but very entertaining.