For over three years a group of military men have been marooned on a mysterious island. They find a building and enter to find tanks growing embryos. There is a Nazi flag and everything is in German. One tank has a beautiful woman fully grown. Their entrance revives her and they are forced to break the tube to rescue her. Later they find another beautiful woman who speaks German. They don’t have time to find out who she is when a raptor attacks killing several of the men including their leader. Just as the raptor is about to kill someone the mysterious woman that they revived manages to grab the neck of the raptor and break it with her bear hands.

This is a reboot of Shanna and it starts off strong. A mysterious island with a Nazi laboratory. From there we find out that the island they are on has prehistoric creatures and other weird phenomenon. Finally we are introduced to the new Shanna who has incredible strength not to mention being a real looker. This is a new series to me and I already look forward to the next issue. I have a feeling this re-imaging of Shanna will be a real winner. 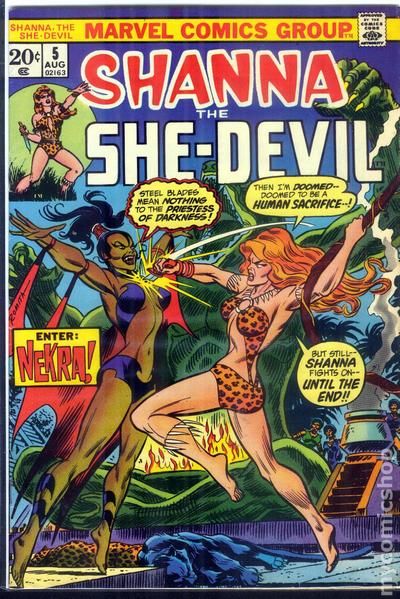 Shanna and Patrick are having an arm wrestling match when it is interrupted by the arrival of a jet. It is Jakura Singh the Shield agent. He takes both Shanna, Patrick and the leopards to a Shield carrier off the coast. There they have a teleconference with an FBI Agent and Professor Xavier. They learn that the Mandrill was a mutant and another mutant is part of his organization.

This other mutant is Nekri a kind of vampire woman who is leading the Mandrill’s all female cult. She goes after Patrick and Shanna for their part in his capture. She sets fire to Patrick’s place and while Shanna rescues him, Nekra fights Ina and Biri. Shanna rescues Patrick and then takes on Nekra. Nekra seems invincible but Shanna manages to get her in a headlock and choke her unconscious.

Well this was the final issue for her series. Apparently a female lead wasn’t enough to grab readership back in the early seventies. This issue was a bit ho-hum. They drag Shanna and her leopards on a fighter jet and almost crash it just to have a pointless meeting. Nekra was easy to beat and nothing much happened. We still are nowhere close to rescuing Shanna’s father.

Still Shanna would go on to be an established character in the Marvel Universe. The story continued in Daredevil and other titles that she guest starred in. Eventually she would find a permanent home in the Savage Land with Ka-zar. This was the perfect place for her to end up and we will see much more of her in future reviews of the Ka-zar title.

Shanna and her leopards start off this issue stopping a runaway rhino. She and Patrick the game warden are in the city because they were invited to dinner by a mysterious host. So Shanna puts on a dress and with Patrick and her leopards in tow head out to a mansion in the countryside. Here they find three other guests to a hooded host. The hooded man wants Shanna and his guests to help him take over three African countries. None of the guests are interested and a fight breaks out. The hooded man is revealed to be a half-man half-mandrill called the Mandrill.

Shanna and her leopards manage to break out and escape the Mandrill and his army of women that have tattooed the Mandrill’s pattern on their faces. She gets to the land rover and makes it to the city. There in her hotel room is the Shield agent Jakuna Singh. He tells Shanna that the Mandrill also has her father captive and wants her to go back and be captured. A transmitter in a bracelet will call in Shield agents to the rescue. So she goes back and gets captured by being shot with a tranq dart. Wakes up on a table with a quack doctor about to tattoo her face with the Mandrill’s pattern.

Well Mandrill learns it’s never good to choose a woman’s cosmetics for her or underestimate her strength. She frees herself and calls in Shield. Mandrill runs away but gets caught by real mandrills. Shanna rescues him but is too late to save her father. The Mandrill’s followers have taken him away.

Wow. This issue really packed a lot of stuff in it. Good stuff. We get a real nasty villain with some grandiose plans. Patrick the game warden who has had some brief appearances so far gets some time. He seems to be the love interest for Shanna in this series. Jakuna Singh is developing into a semi-regular ally and Shield looks to make Shanna a part time agent. She still manages to come across as one bad-ass chick. Doesn’t take crap from anyone. I am really beginning to love this series.

Shanna is working on getting workers to her jungle home. She wants to build Frank Lloyd Wright’s The Ecological Niche. A native comes asking for her help. A rogue cape buffalo has destroyed their village. So off she goes with her leopard friends Biri and Ina. She falls into a pit but manages to avoid the sharp stakes. It is here she is rescued by a strange tribe of whites. They are attacked by men wearing bull masks. It is later found out that they are from a lost tribe of Minoans who build a city in a lost valley. Now the city is ruled by a deposed African dictator who controls the fear bulls. The mutated cape buffalos that can emit a fear ray from their horns. Shanna manages to overthrow the dictator and free the people of this lost Minoan civilization.

This story has a lot of Edgar Rice Burroughs in it. A lost European civilization that seems to litter the landscape of Africa. The story was fast paced and interesting. I would have liked to learn more about how the dictator became the high priest or how the cape buffalo mutated. Maybe that would have been explored later if the series lasted longer. So we learn that Shanna is loaded. She can pay triple wages for men to come out and build her Frank Lloyd Wright home in the middle of nowhere. Shanna is showing herself to be a very strong and competent woman not to mention really sexy in that leopard-skin furkini.

The evil El Montano or “The Mountainous One” is enslaving members of the peaceful Fulani tribe. They are taken by his Arab henchmen to his fortress in the Sahara. Shanna hears about this from Jakura Singh a Shield agent. Shield wants Shanna to stop El Montano because he is going to hijack a French rocket being launched in the Sahara. A scheduled moon shot the rocket has been stuffed with over a billion in heroin. So El Montano can get drugs and ransom the rocket back to the French. Shanna agrees to stop him and free the slaves. So with her two leopards Biri and Ina heads on out. They at first get captured but Shanna manages to break free and with her leopards takes out the Arab henchmen. They also have to defeat his pet Siberian wolves. Finally it ends when he is trying to escape by crossing a wooden plank over the slave pens. His weight breaks the plank and he falls into the pit and faces the revenge of those he enslaved.

Well the French have some great security. A technician sells the technology to hijack the rocket and they can’t stop over a billion in heroin being smuggled onto the rocket. Its a good thing Shanna is around because she seems to be the only competent person around. This was a great second story. El Montano would make a great Bond villain. Big larger than life with a secret underground complex. Its full of armed men and high tech gizmos and he uses wind sail-ships on the Sahara. He also doesn’t just kill an enemy when they are captured but allow them time to escape much to his regret. Finally Shanna looks awesome in her leopard skin furkini.

A poacher by the name of Ivory Dan is hunting elephants. Luckily Shanna and her leopard friends Bini and Ina are there to stop him. Ivory Dan is a real dickweed and has trouble getting the hint after his first ass kicking. He tries again and once again gets his ass kicked. He ends up getting trampled by the elephants he was trying to hunt.

Also after Shanna is knocked out she has a flashback to her old life. Its a sad life. As a little girl her big game hunting father accidentally shoots her mother. As an adult Shanna becomes a veterinarian at the New York zoo. Vandals one night break in and shoot all the big cats. Only two leopard cubs survive. She decides to take the job offer to bring them back to Africa and teach them to live in the wild. While there she becomes Shanna the She-Devil.

The first issue for a new comic book character. Back in the early ’70s Marvel introduced female characters to generate interest in comics. Now clearly Shanna is a rip off of the old pulp character Sheena. She has the same leopard skin costume and lives in the African jungle. Even her name is similar. The only difference is she is a redhead instead of a blonde. Thankfully Shanna became her own character in the Marvel universe. She has in interesting origin unique from Sheena and becomes a character in her own right. She is smart, tough and incredible sexy. A great start for this character.