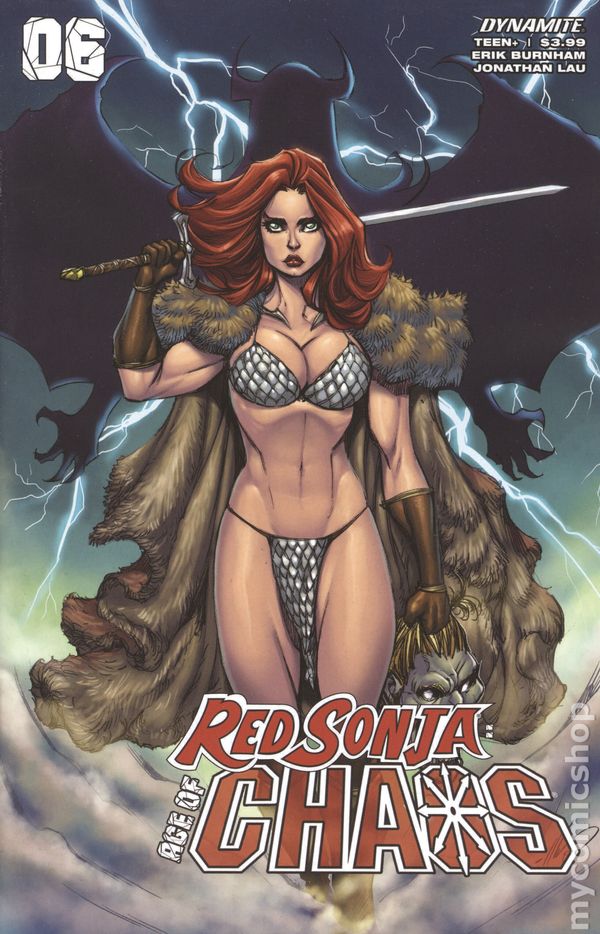 Sonja is fighting Kulan Gath who has possessed the body of Purgatori. He also manages to kill Evil Ernie. Ernie manages to infuse his power into Sonja’s sword before he dies. This is enough to cut off Purgatori’s hand. The pain is enough for Purgatori to focus and regain control of her body. Sonja still has to fight her. Sonja manages to get hold of Gath’s amulet. She places it on a dead corpse and Gath finds himself brought back. Because Sonja has altered the future Purgatori dissolves and all the characters go back to their time. The events did not occur and the future is safe. Sonja lets a weak Kulan Gath go wander off into the desert vowing to kill him later.

So the series ends. I have to say I am very underwhelmed. It was a quick read since not much happened. A very anti-climactic ending. This wholes series just didn’t really do anything for me. I’m not a fan or familiar with the Chaos characters so I was already not invested in the characters. This was a crossover that I don’t think should have happened. It didn’t fit well into Sonja’s world. I suppose a different writer could have done something better but the whole concept just doesn’t seem all that interesting. 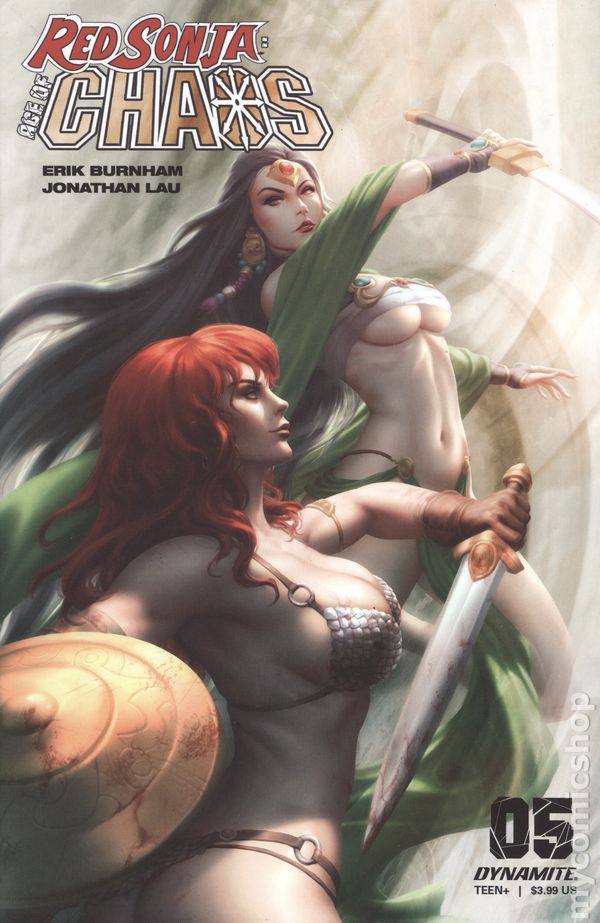 Sonja and Chastity have reached the temple. They find that Jade and her vampire minions have also arrived. Chastity manages to chop off the head of Jade which just makes her minions more angry. Then Purgatory shows up and Chastity volunteers to delay her for Sonja to enter the temple and bring back Kulan Gath. Sonja reaches the temple and uses her blood on the amulet. Only it just brings the spirit of Gath back. A real body is needed. Purgatory comes in with the severed head of Chastity. Sonja actually holds her own in the fight. When it looks like Purgatory is about to triumph she barfs up the smiley face of Evil Ernie she swallowed. The smiley face absorbed power from her and brings back Evil Ernie. Ernie uses his magic to bring back Jade and Chastity. Then he turns them against Sonja and Purgatory. Ernie then tries to grab the amulet but it repels him because his magic energy is not compatible. He throws it away and Purgatory catches it. She is then possessed by the spirit of Kulan Gath.

Well they promised non-stop action and they delivered. The whole book was just one continuous fight scene. Which wasn’t necessarily a bad thing. The story moved along at a quick pace which is what this story has needed. The bad is well, it was just non-stop action. Not a lot of meat to the story. So we are moving to the conclusion of this and hopefully it will make sense. 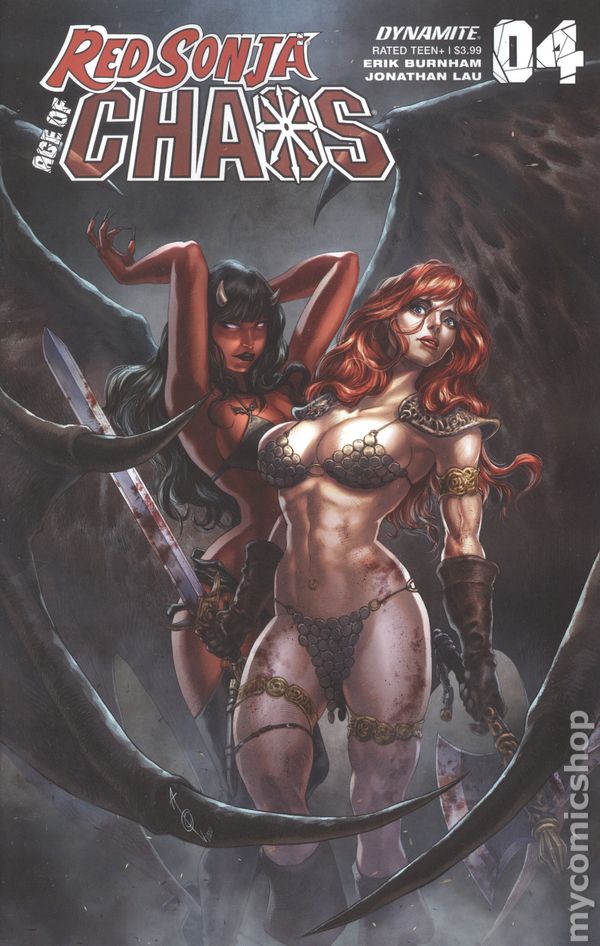 Sonja and Chastity arrive at the village of Kor. Sonja seeks out a wizard she knows dwells there. At his store they are ambushed by him. The wizard thinks they are assassins from fellow mages of the coast. Sonja manages to get a knife to his throat while he was attacking Chastity. They convince him they are not assassins and want to find out how to resurrect Kulan Gath without sacrificing another person. So the wizard conjures up the ghost of the seer Xortet. The seer will answer truthfully three questions. The first is Chastity exclaiming holy shit and the ghost answers her in English. She asks how he understands and that is the first question wasted. So Sonja asks how to resurrect Kulan Gath and the answer is a temple in the desert. They must feed the amulet blood or flesh. Chastity asks about the others from her time and gets where they are now. The ghost then leaves since all the questions have been asked. Meanwhile Evil Ernie is traveling to the temple and gets in a fight with Sakkara. He eventually loses and Sakkara eats his smiley face pin to give her more power. She opens a portal and comes out as Sonja and Chastity are fighting a horde of vampires.

This wasn’t too bad of an issue. The beginning with the confrontation with the huge fat woman was kind of funny. They have a bunch of exposition to find out what they are supposed to do and some more comic relief. We also get a nice fight between two of the demons. At the end the writer promises nothing but action from here on out. So some nonstop action might be what this series needs. I admit that the concept isn’t the most exciting but it isn’t boring me yet so we’ll see. 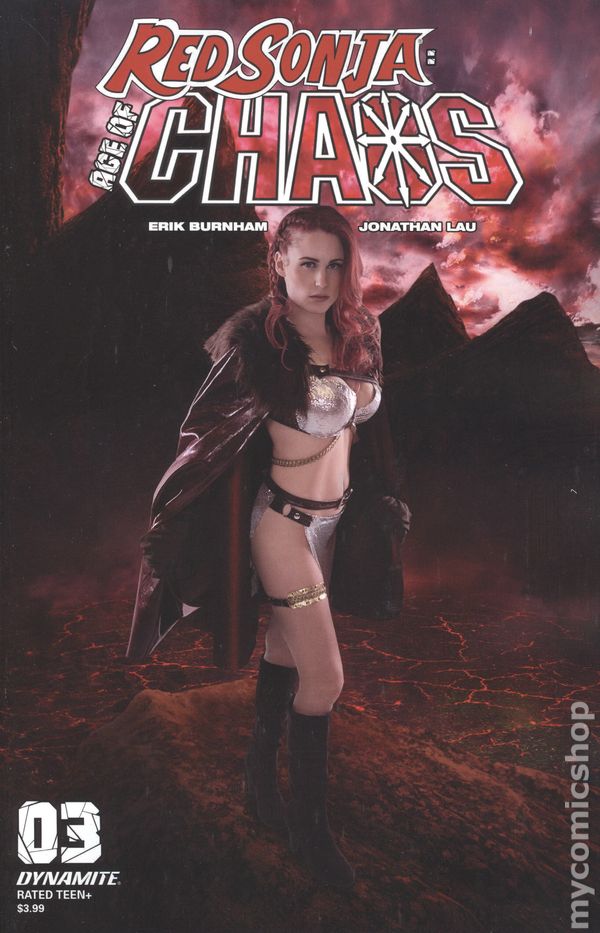 So the demon who I can’t remember her name offers to get the amulet of Kulan Gath for Sonja. All she has to do is a small unspecified favor in the future. Sonja agrees and has to reach into hellfire and burn her hand getting it. Sonja also refuses to use Chastity as the sacrifice to bring back Gath. So the two girls go off to a city in search of whatever. Meanwhile Evil Ernie and his talking smiley face find a dead dragon that they resurrect. Another female demon who looks like the one that helped Sonja is fighting warriors in Hyberborea. Lady Hel recruits her to stop Sonja. Then she goes to Khitai and finds Lady Jade now in control. Jade loves this new setup and dreams of conquering the world. Only Hel reveals that if Sonja succeeds then the setup is all over for her. So she agrees to get in on stopping Sonja.

I am not really all that excited about the series. First there are just too many different characters I don’t know about or can keep track of. I don’t even really understand the convoluted plot and what the objective is. So far Sonja hasn’t done much and seems to be going along as confused as I am. I suppose it could get better but I am skeptical. On a plus note I love the cosplay covers of Shannon Kingston. She captures exactly how I would envision Red Sonja to look in real life. 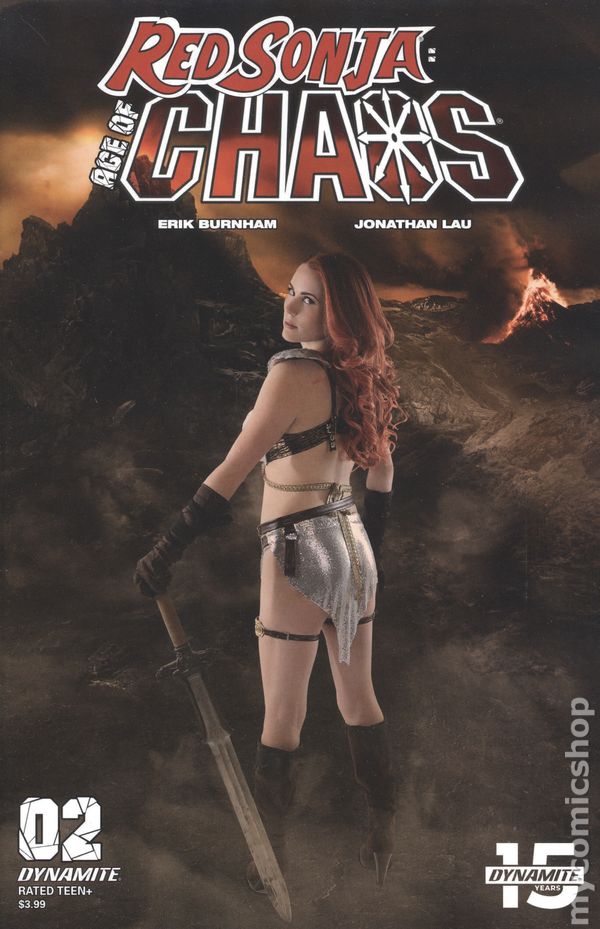 Red Sonja is putting to rest the fisherman who was killed by vampires when Chastity jumps past her. She tears apart a vampire that was going to attack her. After a tense standoff, Chastity is surprised that Sonja can speak English and knows of New York. While talking Lady Demon comes around to talk. A brief fight shows that Lady Demon is impervious to their attacks. So she then gives the story of what happened to break time. She was the one that gave the mystic bullet to Catherine Bell who shot it into the amulet in the future. This apparently destroyed time and why Chastity ended up back in the Hyborian Age. The only way to save time is to resurrect Kulan Gath. This gets Sonja mad and she throws a knife into Lady Demon’s eye.

OK so this is basically an exposition issue. A fairly convoluted exposition that involves for some reason that cheating fate by denying Kulan Gath the ability to come back will break time. It doesn’t effect the Hyborian age but apparently there will be no future. I guess so but it is a bit of a stretch. Also I remember this artist and he for some reason draws Sonja with a big hair style which just isn’t her. So we’ll see how the story continues next week. 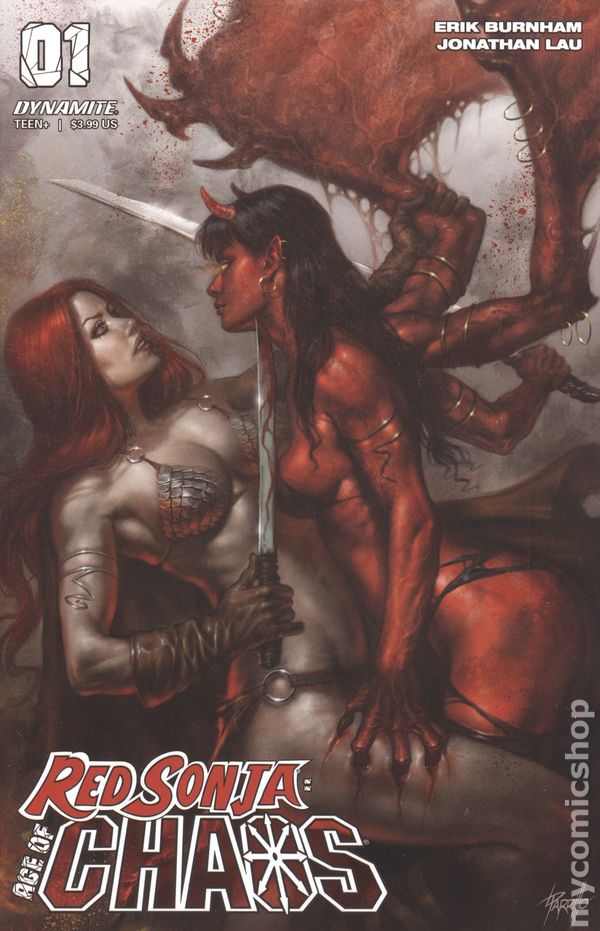 Red Sonja is fighting Kulan Gath again. Once again she wins and chops his head off. Only he still lives and will probably come back. So this time Sonja crushes his head and takes his necklace that stores his power. She rows out into the ocean and tosses it in. In the present day someone finds it and puts it in the New York Metropolitan Museum of Art. Mistress Hel the personification of death plans to use this necklace to increase her power. She hires Evil Ernie, Jade a vampire and Purgatory a demon. All three try to take the necklace while fighting each other. Chastity a human/vampire hybrid also shows up to stop them. During the fight a woman called Bad Kitty shots the necklace with a magic bullet and causes a massive flash. Back in the Hyborian age Sonja is brought back to shore by the fisherman she hired to take her out. Two young vampire children attack the fisherman and Sonja kills them. Then she chops off the fisherman’s head so he doesn’t turn to a vampire. Sonja vows to hunt down the vampires as Chastity is in the background ready to pounce.

I am not real familiar with the Age of Chaos characters. I only bought this for Sonja. The writer did a good job of introducing the various characters for someone unfamiliar with then to understand. So far it has started out strong with a fascinating story. Sonja should have a challenging adventure dealing with the various evil beings unleashed in her time.