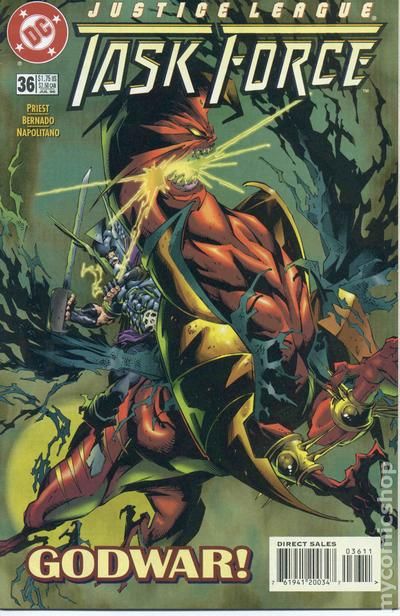 Truimph is attempting to stop the Minuteman III missile. He does destroy it but three warheads manage to break off. At this time Morgan and the others are fighting the horde that is attacking Vlandar. Ray the superhero has been taken over by the wizard Quantum. Now Quantum is in Ray’s body and vise versa. Quantum is finally pinned by Martian Manhunter and forced to switch bodies. The missile warheads are stopped by Triumph. The warheads were dummy ones because the missile was a test launch that somehow found its way into Skartaris. Morgan at the end takes the task force to the shuttle craft from issue 6 that leads to Peru.

So this issue comes to a close. A very confusing issue with all sorts of stuff being thrown at you. I didn’t feel like the writer really understood Skartaris. Even at the end at the Atlantean shuttle station the shuttle is covered with graffiti in English. Were the fuck did that come from? Interesting to see the Warlord in this but just didn’t feel at all like the writer really got the character.

Morgan and the Task Force are battling a horde of barbarians to save the village of Vlandar. One of the members Ray is very appalled by the savagery. So he decides to go and find the wizard Quantum who is responsible. He finds the old man who puts on an act that he is defending his people from Morgan and the people of Vlandar. Meanwhile Martian Manhunter gets the talisman that the mercenary their ship crushed was supposed to retrieve. He brings it to the wizard Eballum who can then activate the Sword of USAF which turns out to be a missile. At the end Ray comes to fight Morgan and company after being convinced by Quantum that they are evil.

So the second issue with The Warlord and Skartaris as guest stars. An OK issue. Seems Morgan is like me and only recognizes Martian Manhunter. This series had some very obscure characters. Didn’t really feel like Warlord or Skartaris which isn’t surprising given how its being used. Still nice to see that the character wasn’t totally forgotten. 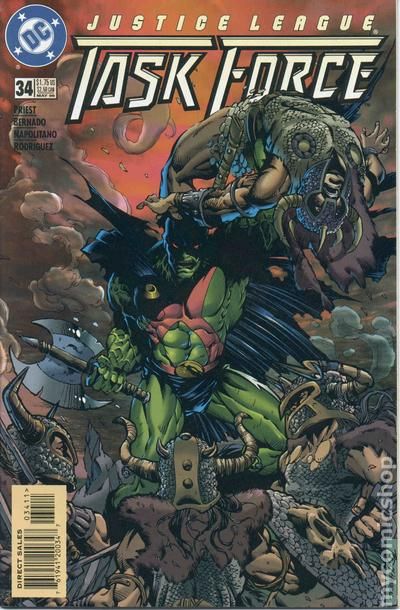 A barbarian mercenary is outside a city about to go and steal something called The Eye of USAF. He has some modern equipment like binoculars and a computer. Unfortunately he is crushed under the arrival of a spacecraft. Inside are J’onn J’ozz and some other superpowered heroes. They are in Skartaris and have a brief fight with the survivors. Then the ship they arrived in explodes. Later around the fire they talk to the barbarian survivors and tell their story. On another planet their ship was impounded and destroyed so they had to take the panda ship that they had. They went into warp in the Earth’s atmosphere and ended up in Skartaris. They then discuss maybe helping the locals who need these wizard icons to save their people. At the end they meet up with Travis Morgan and Shakira.

So this was an appearance by the Warlord in another title. It starts of course in the middle of something but does a good job of explaining how they came about in their current predicament. I am not familiar with the characters except the Martian Manhunter and just bought it because the Warlord was in it. So far the story intrigues me so interested to see how they handle the time in Skartaris.