Franz and his comrades are ordered to go north. Division HQ is under attack by paratroopers. They first get ambushed by some old men in French army uniforms. Then they are attacked by American planes and the trucks are destroyed. They come on paratroopers trapped in trees and use a flamethrower to burn them out. They then go on foot and come to a bridge occupied by American paratroopers. Ludwig, Franz and Hugo are assigned to swim under the bridge and plant explosives. Later they arrive at HQ and kill the occupying Americans. At the end the three are resting and speculate that this raid will convince the allies not to invade. It is June 6, 1944 D-Day.

318 B.C. the Goth chieftain Vertix is killed fighting the Mongols. His son Maric is to be the new chief. First he must stay in the Bird forest where no man has ever returned. After fighting off a pack of wolves he falls to an underground cavern. There a primitive woman leads him to her tribe of Neanderthals. They try to kill him but Maric survives and becomes the new ruler.

So this is the last issue for this series. I suppose a series seen through the eyes of the enemy just couldn’t find an audience. Too bad because I liked the stories. Probably ahead of its time. This issue ended with the guys just before D-Day not even knowing that they were fighting the opening salvo in the invasion. An appropriate ending to a unique series.

The second back up was a bit weird. It also didn’t make much sense. If nobody ever returned from this forest then why did Maric have to face it. Obviously his father didn’t. A very strange story.

Franz and his friends get leave and are in Paris. They do all the tourist type things like visit the Eiffel Tower or cruise the Seine. Eat at a French Cafe and see the Louvre. All along the day they witness Resistance attacks that they take part in. The final one at the Arch of Triumph has the resistance sacrifice their lives to plan the French flag atop the monument.

Feldwebel Emil Wasser has an obsession of collecting souvenirs for his girlfriend back home. Polish hams, Dutch cheese, Belgian lace and French champagne. On the Egyptian front he is having problems finding something that would impress her. The squad attacks a British fort. Wasser goes in and sees a picture of Winston Churchill that would make a find souvenir. It is wired to a grenade and goes off putting an end to Emil Wasser’s souvenir collecting.

The Chance Vought Corsair. A plane that saw action starting at Guadacanal. Nicknamed the Whistling Death by the Japanese downed 2,140 aircraft at a cost of only 189 Corsairs. Later saw action in Korea and was the last prop driven fighter build in the United States.

This was an interesting issue with the guys doing the tourist routine. I think it did a great job of showing this city under occupation. The Louvre is being looted of art as they browse it. They have a contempt for the French who for the most part just went on with their lives. Still there was resistance. In one instance a brother kills his own sister and her German officer date. Shows that in some ways France was in its own civil war during this period.

The second story was with a different character and quite an enjoyable story. This series was branching out into other characters and was going to jump around in time as we have already seen. 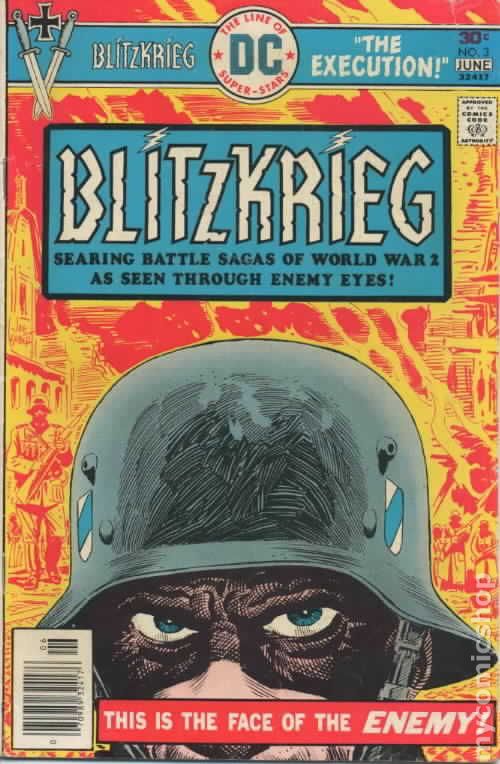 Franz, Hugo and Ludwig are assigned to the coast of France. While guarding the coast they successfully ambush an allied recon patrol that was landing by submarine. Later they are attached to an SS unit. At an abandoned French village the soldiers are enjoying a ride on a carousel when attackers machine gun the soldiers. The Germans retaliate with mortars then move in. They capture American army Rangers who are taken into the woods at Malmedy and executed.

“Do the Nazis Still Live (In Fact and In Principle)?”
By Alan Asherman

An article on the rumors of Hitler and other top Nazis living in Argentina. Also goes into the popularity of Nazis paraphernalia that is being sold and Swastikas being drawn on houses of worship.

Franz, Ludwig and Hugo are riding on tanks as the Wehrmacht invade the Ukraine. They are ambushed by partisans who manage to destroy a tank with Molotov cocktails. In retribution the Germans hang some men in the village. They are then attacked by children. They manage to fight them off and are confident that they are winning since the enemy is resorting to using children.

A feature that you can cut and paste a incident. This incident is the U.S.S. Buckley destroyer ramming the U-66. German sailors then tried to climb aboard and were repelled by the crew throwing knives, coffee cups and buckets. First time the command to repel boarders was given on a U.S. Navy ship since the Tripolitan War.

So we get two stories in this issue. The first was a bit confusing in that they start out patrolling the French beaches before D-Day and end up at a famous massacre that occurred during the Battle of the Bulge. I think it was a fictional story based on some real life events. Once again in both stories it is Franz who questions the actions but he does also follow orders which was the whole problem with the Germans during the war.

The diorama story was a fascinating read. I enjoy reading about these historical tidbits about the war.

Franz, Hugo and Ludwig are with a squad that takes out a holdout unit of Polish soldiers. As a reward they get the easy assignment of guarding the Jewish Ghetto. Franz doesn’t think its a proper role for a soldier but the others welcome the reprieve. Meanwhile young Benjamin is about to turn thirteen and will celebrate with his grandfather and brother in the ghetto. They get a warning from a Jew that escaped the camp. A sympathetic guard let him go and he tells of the gas chambers. The Jews decide to fight to the death rather than be marched to the camps. Now the Germans must use 6,000 troop to literally raze the ghetto.

“The Battle of the Warsaw Ghetto”
by Allan Asherman

A brief history article on the rising of the Jews in the Ghetto. Short but very informative.

Attila comes on a nomad camp in northern Gaul. Because they don’t have tribute he takes the chief and drags him around the camp. The circle he leaves is not to be crossed by any of the nomads on pain of death. They will have tribute next time or else. So the nomads stay and prepare. When the Huns return they are ambushed and massacred. The nomads go into the hills to wage a guerrilla war against the invaders.

“Battle Album”
Writer & Artist: Sam Glanzman
Panther. When the Germans encountered the T-34 Soviet tank they had nothing to counter it so developed the Panther tank. An excellent tank whose only flaw was the Germans couldn’t produce enough of them . There were 5,805 build compared to the American Sherman that produced 49,000.

The second issue dealt with the Jewish uprising of the Warsaw Ghetto. I found it a fascinating story that shows the horror the Jews must have went through and the bravery they faced in fighting the Germans. The stories are quite clearly about the three German soldiers Franz, Hugo and Ludwig. Franz seems to be the one with a conscience. He is uneasy about having to shoot woman and kids. Hugo seems to be the opposite. He believes that are all scum that deserve it. Ludwig seems to be in between. A soldier with no strong feeling but just going along with the flow. A good balanced setup for the characters in this series.

The Huns seems to be the backup for this series. It is also an enjoyable series. I am not familiar with this time in history but it does seem to be an interesting period. I look forward to more stories about Attila.

The Germans are battling for Warsaw and a radio station is defiantly playing the Polish national anthem. They state that as long as it plays the people know that Warsaw has not fallen. A squad of Germans are moving through the city fighting armed resistance. They aren’t that particular who they shoot and do shot down unarmed women and children. They briefly take shelter in a bakery and enjoy some fresh baked bread before being ordered to take the radio station. They assault the building but lose a tank to a Molotov cocktail before killing the radio operators. They comment at the end that Poland is kaput. An old man plays the national anthem as victorious Germans stream past his window.

“The Why of Blitzkrieg”
by Allan Asherman

A brief editorial on how this title came about and what it will feature. Basically it tells the war from the point of the Germans. It will have various types that served and the valiant resistance groups they faced. Its core purpose is like their other war titles to show the terror and futility of war.

Attila the Hun is ravishing Europe and is waging a brutal campaign against the Goths. A young boy is assigned to polish Attila’s sword and he overhears the boy talking of how he would be invincible with a sword like this. Attila tells him its the owner and not the sword. He commands him to go and bring him the head of an enemy. The boy goes through the ruined city and finds a young his age with a sword. He kills the youth but his sister comes out and kills him with her ax. Later Attila rides off after they can’t find the boy and exclaims that nothing can stop them. The sister also swears over her dead brother that the Goths will never be conquered.

The Dornier Night Fighter Do-335A the Anteater.
A high speed bomber that due to bureaucratic red tape saw several design changes. Had a propeller on the back and an ejection seat. Nicknamed the Anteater because of its appearance.

So DC was the undisputed leader in the war titles back in the seventies. This is an interesting one in that it told the stories from the German’s point of view. Naturally being the bad guys they are show to be somewhat brutal but it does give the Germans various personalities. They complain about the bad food and officers as any other soldier would complain. One was a mailman and talks about his favorite bakery that he misses. Its true they are quick to shoot and ask questions later but have a valid point in that the enemy is wearing civilian clothes and hard to tell from the general population. An enjoyable story that gives the viewpoint of the Germans and also the bravery of the Poles in defending their country.

The second story is another one of brutal invaders but takes place centuries in the past. Like all the war stories it illustrates a pointlessness to war and the waste that it causes. Plus the Battle Album feature that showcases some cool weapon from WWII makes this another winner in the DC war comics.