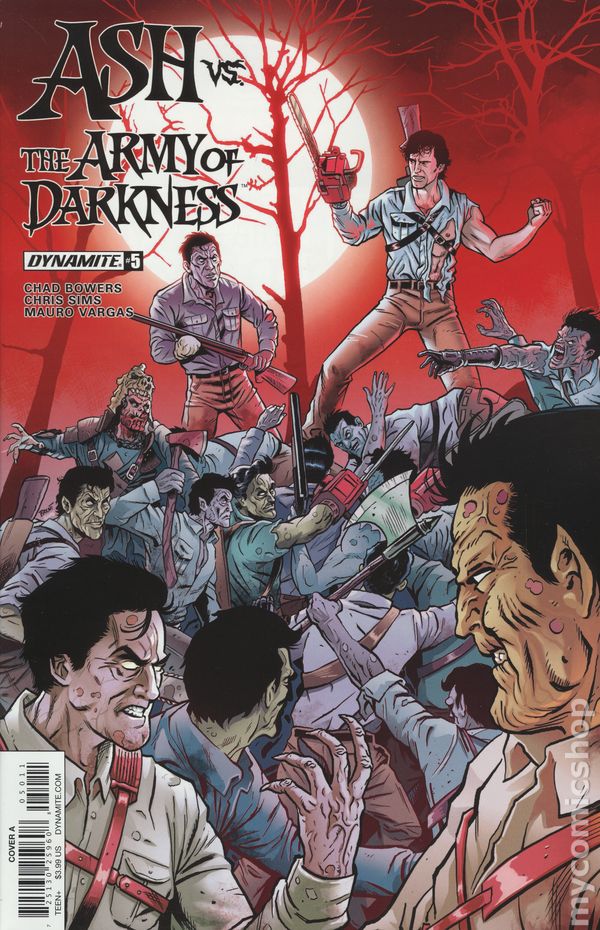 All the students at the homecoming dance have turned into deadites. Ash gets out his chainsaw and shotgun but Joanne won’t let him kill any students. So they retreat from the gym. They find out that the director of S.M.A.R.T. is behind this. He has decided that an undead army of young teenagers will really be popular with the Department of Defense. Ash manages to get to his car and defeat the deadite Westlake with saws installed by the shop class. He then drives his car into the gym and runs over director Friedrich. They manage to gather up the pages of the Necronomicon and Joanne recites the words that turn the students back to normal. Later Ash gets this old job back at S-Mart. There he finds his old detention gang have also got jobs with him. The HR manager is revealed to be a deadite and plots further evil.

I loved this series. The ending was just what you would expect. Ash manages to save the day. He gets his job back and now has friends to help him. The Ted Raimi character comes back and shows he is a deadite plotting further evil. This would have definitely made a cool sequel to this franchise. I definitely recommend to fans of Evil Dead/Army of Darkness. 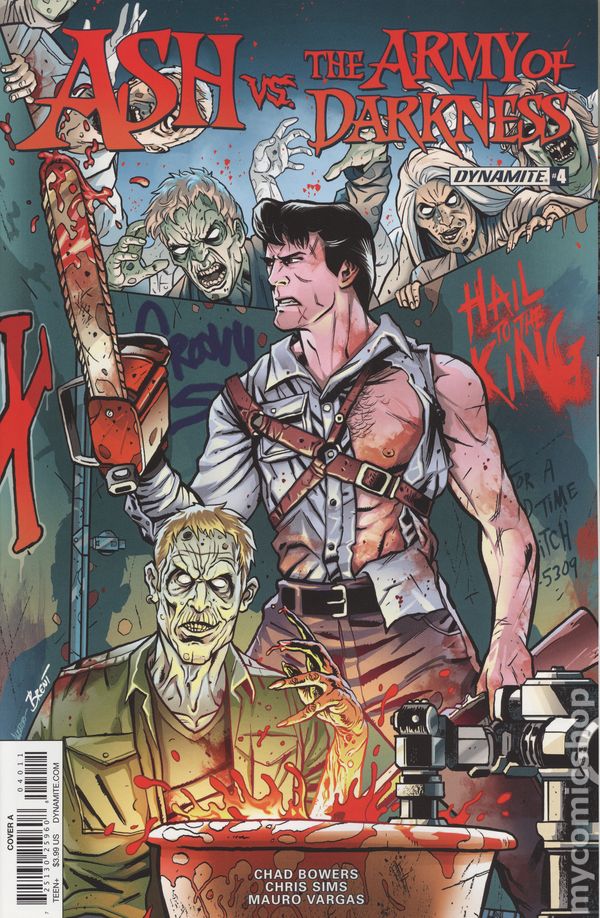 It is after the cafeteria food fight and principal Wentworth is really pissed. Ash and his rival Sgt. Westlake pretty much think its a joke. Until Wentworth forces them to chaperone the upcoming homecoming dance. The nerdy guy decides to ask the coolest girl to the prom and she accepts. Ash later means the director of S.M.A.R.T. a Frederick. He offers to get Ash’s job back at the S-Mart if he will just leave. Ash considers it. Frederick is also working with this young girl to distribute copies of the Necronomicon among the students. So the big dance comes and Ash attends with everyone. At the announcement of the homecoming queen Principal Wentworth reads an incantation. It turns the students into Deadites.

So we find out that the director of S.M.A.R.T. is really an evil guy. That there is tension between Ash and Sgt. Westlake because the two are so much alike. It of course ends with a big bunch of Deadites at the prom. Not necessarily a big surprise but still a logical ending to where this story was headed. 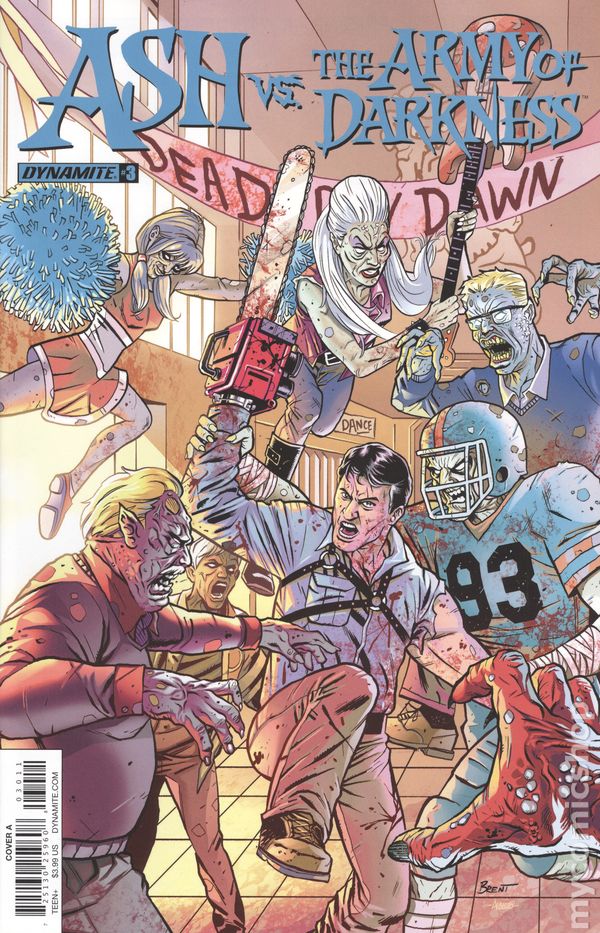 Back in the middle ages the people that Ash helped decide to form a society to battle demons. They use his chainsaw and shotgun ideas. Throughout the ages this society has battled Deadites. Now it is the Supernatural Military Adjacent Response Team. Their commander is shocked that Ash fits the description of the Promised One to a tee. S.M.A.R.T has the school continue on as normal. Only they will now patrol the school under the cover of being an outside security firm evaluating security. The students obviously suspect something with all these men armed with shotguns and chainsaws. Ash gets in a fight with a big blowhard from the S.M.A.R.T. contingent. His students side with him and pelt the men with food. Meanwhile a girl is working with a mysterious man to disrupt the upcoming homecoming.

So the plot thickens as we now find out the origin of this mysterious military group. I love the idea that those guys back in the middle ages formed this society based around Ash. Ash is still funny as hell. There is one time he comments that things are so slow he is actually learning something about the middle ages. A good issue to catch our breath and get some needed exposition. Sounds like things heat up next issue. 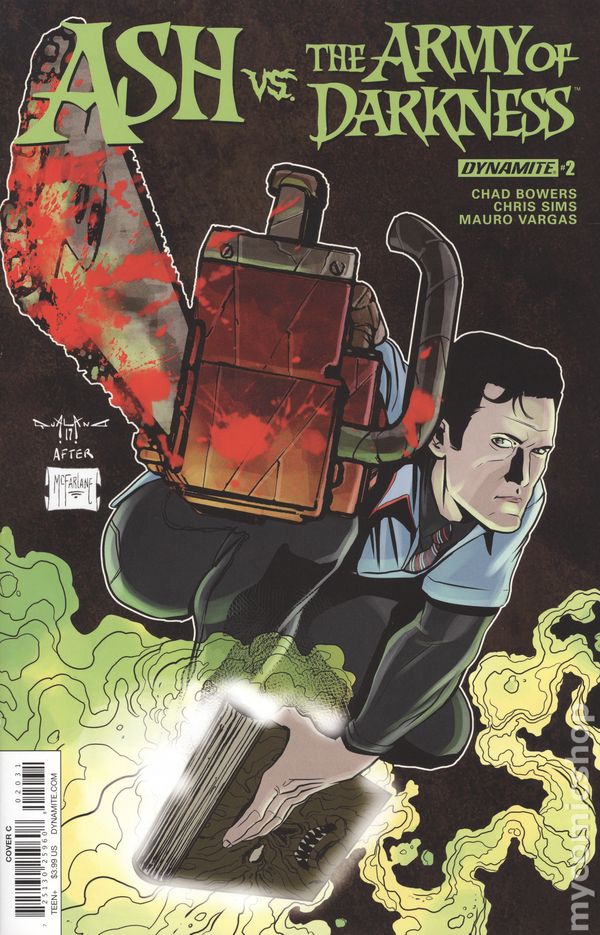 Alan Shepherd High School in Dearborn, Michigan. The janitor has to clean up the mess of the dead giant frogs and is really pissed about it. He would quit if he didn’t retire in two days. Unfortunately he won’t last that long. The evil takes possession of the dumpster he is dumping the corpses in and thus takes possession of him. Back in the principal’s office the detention students are demanding to know what is going on. Ash comes bursting in covered in something red. He was in the cafeteria and the condiments came alive and attacked him. The whole school seems to be possessed. They go to leave and find the trophy cases just outside. The trophy figures come alive and attack.

Later they find that the school now looks like a Salvadore Dali painting. The possessed janitor knocks Ash clear out of the room and he chases the others to the gym. Ash finds a portal that leads to his car. There he gets his shotgun and chainsaw. The janitor gets blown to pieces before Ash can do anything. Military commandos armed with shotguns and chainsaws come repelling from the roof. They announce the building is under quarantine by the Supernatural Military-Adjacent Response Team(S.M.A.R.T.).

This was another fun issue. Ash still goes around with this arrogant attitude. The whole school building is now possessed by the Necronomicon. We are also introduced to some special military unit tasked with dealing with supernatural threats. They also seem to be inspired by Ash. A fast paced story so far that keeps the reader interested for more. 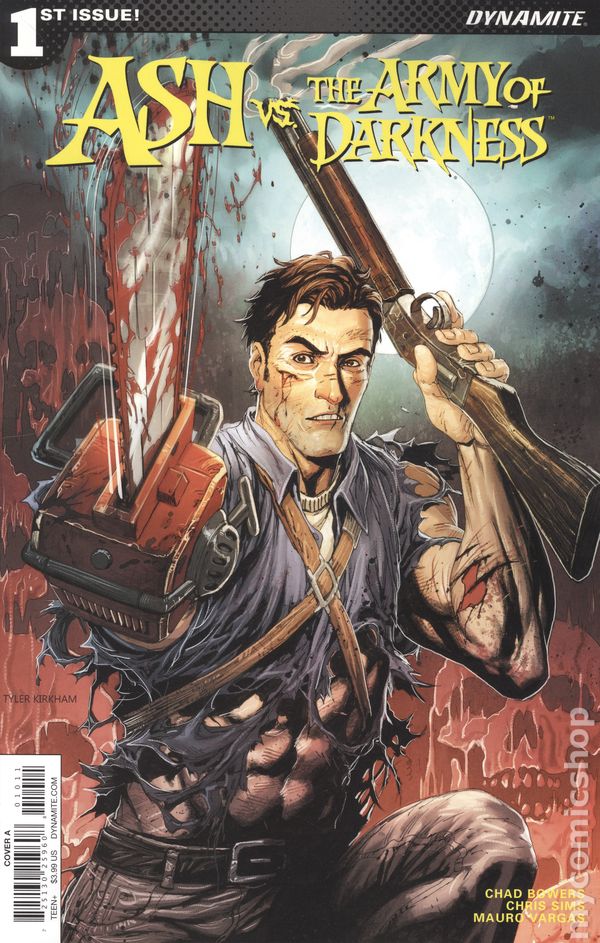 An excited soldier runs into a command center with news of a possible T.P.O. involvement at a high school in Michigan. At that high school Ash is now teaching a history class. Teaching is probably a very loose definition. He is more like interrogating the students about their involvement with the Necronomicon. He does find out the popular kids are actually studying which makes him very suspicious. His next assignment is detention. The kids in it are basically just like the Breakfast Club. A jock, a cheerleader, a goth girl, a nerd and some other guy. They hear a commotion and find out it is coming from the science lab. The frogs have been possessed and attack. Ash squashes them then has to face a giant talking frog. Ash manages to find a blade and kill it. Back at the secret military base they study the images posted on social media. They think the Promised One is back.

So this was a really fun issue. Ash teaching is just hilarious. Like when he finds out they were studying fourteenth century Europe. “Oh that’s easy. It sucked.” Yeah he has a real knack for teaching. We get a fun little battle with possessed frogs from the science lab. Plus some mysterious secret government organization monitoring the situation. The writers really understand the character. So far this is starting out to be a very fun series. 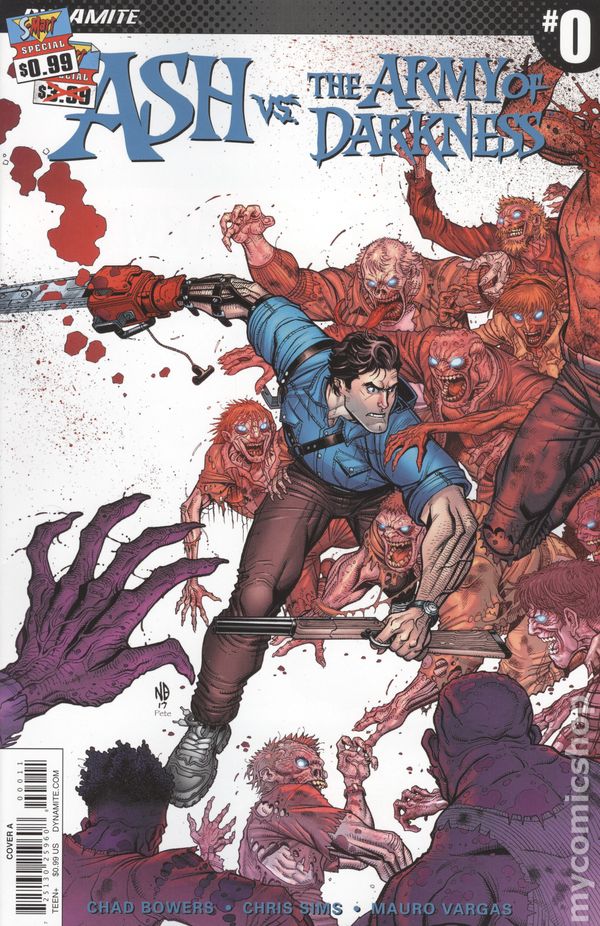 It is the day after Ash shot a deadite at the S-Mart. Unfortunately the store decides to fire him because of shooting a customer with a gun he never paid for. So Ash goes home and does what people do when they lose their job, he sits around in his bathrobe and watches TV. He is visited by Joanne Wentworth the Vice Principal at Alan Shepherd High School. The deadite that Ash shot was their school librarian. A real sweet gal who suddenly went nuts. Apparently other teachers and students have been having similar problems. Luckily because the football team has been suspended from games there is some money in the budget. She hires Ash to investigate and he will do it under the cover of being a substitute teacher.

I love the The Army of Darkness so I had to check out this sequel to the movie. So far it is living up as a worthy sequel. Right off the bat we get Ted Raimi as the S-Mart human resources head. A real hilarious performance that fires Ash for killing a customer. I love the news reports that identify Ash as a local chainsaw enthusiast of using excessive violence. His fellow employees describe him as a deeply unpleasant man who nevertheless is pretty OK with a gun. This story is just tongue in cheek funny. So I am looking forward to as the writers state putting Ash where we need him…in the public school system.