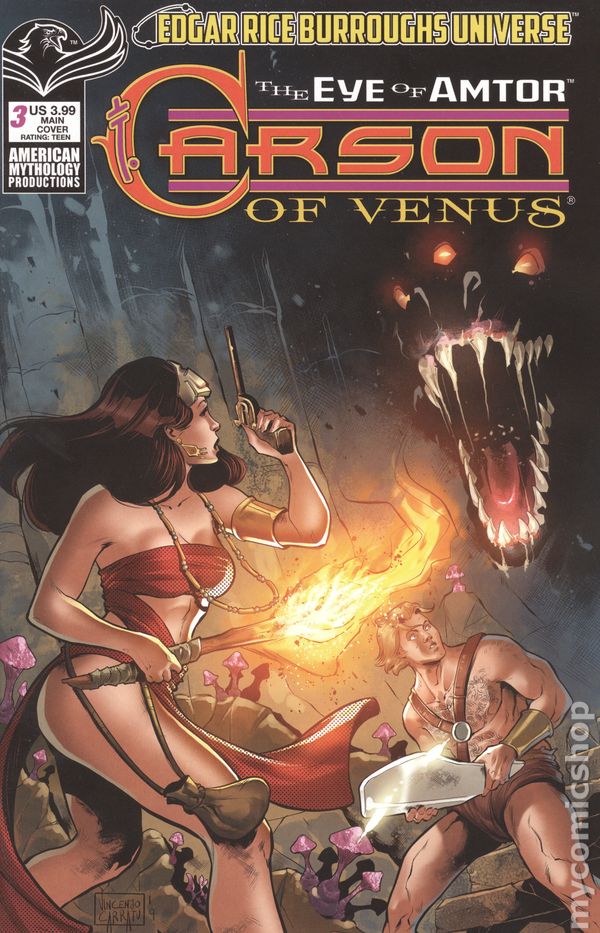 Carson and Duare come to the Mountains in the Clouds for the final piece of their quest. They need to find a Joska a giant snake. The Joska is a feared creature that is rumored nobody has seen it and lived. The Joska lives in caves and they need a scale from it. So the two go into the caves and find one. Carson manages to knock off a scale and the two head back to Loton. When they arrive they find out the Jong has no interest in building a telescope. It was all a bet between the Jong and his chief guard. Ero Shan and Nalte were never in danger and still guests unaware of the quest that Carson and Duare were sent on.

Victory Harbin has been sucked into a portal created by the Mahar. Jason threatens the Mahar and is attacked by her Sagoth servant. Jason shoots him with an energy pistol and jumps into the portal to rescue Victory. Only he finds himself on another world with two suns. Victory meanwhile is also on another world with strange giant insects.

So the Quest for the Telescope comes to an end. We find out it was just done for a wager by the decadent jong of Loton. Carson’s friends were fine and it was a bluff. This was a really fun story. It was in the spirit of Burroughs and this is a prequel to a new novel Carson of Venus: The Edge of All Worlds. This sounds like a really good book. I know ERB Inc. is putting out a lot of good books. I really should start checking them out but there just seems to be so much to read and so little time and money.

The Pellucidar story also leaves us with a cliffhanger. Both Gridley and Victory are on alien worlds. This sounds like it will also be continued in the new novel. American Mythology is doing some great stuff with Burrough’s creations.