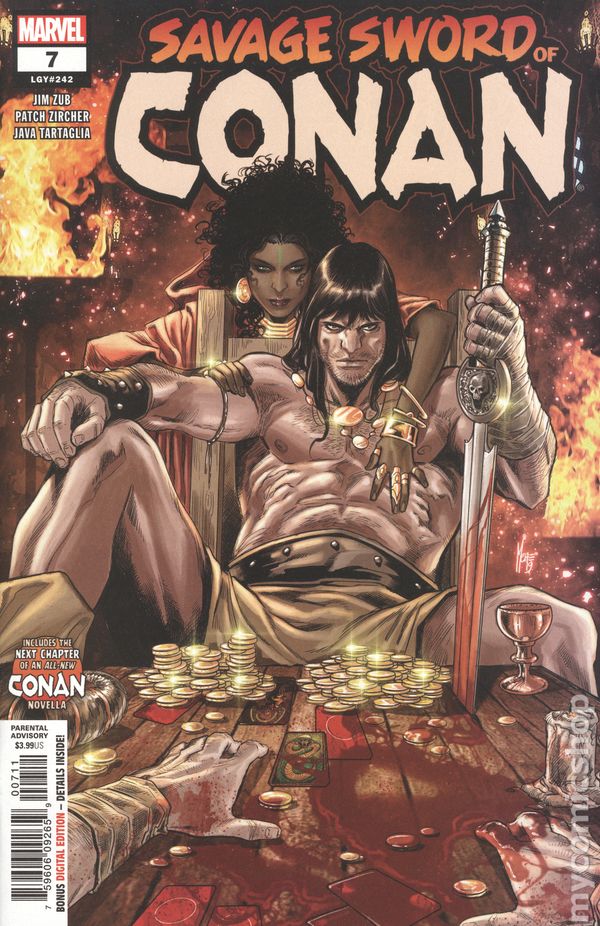 Conan is in Shadizar and comes on a man being robbed. The man offers to pay Conan his weight in gold if he will save him. Conan needs some money so quickly dispatches the four thugs. The man Marandus than hires Conan as his bodyguard. Marandus takes him to a gambling place known as the Demon’s Den. A lot of high rollers in the place. Marandus gets into a game of Serpent’s Bluff with his rival Kero the Callous. The game goes well for Marandus when he clutches his chest and dies. Someone has poisoned him. The house than demands that Conan settle Marandus’s very substantial debt. If he doesn’t then Conan gets thrown into the Debtor’s Lounge and faces some big creature in a pit. So Conan continues the game.

“The Shadow of Vengeance Part VII”
By Scott Oden

Octavia is about to be hanged by the Red Brotherhood. Conan comes riding up and demands she be set free. The Brotherhood under his rival Dragutin refuses. So Conan frees her with a thrown spear. His fellow Kozaks help him and take Octavia away. Unfortunately a spear gets Conan’s horse. A coward than knocks him on the back of his head with a well thrown stone.

Now this story has some real potential. A unique idea to have Conan get involved in a high stakes game of chance. A very James Bond type of set up in the Hyborean age. The story was well plotted and I enjoyed this artists take on the character. They also have released this game Serpent’s Bluff. Sounds like a cross between poker and 21. The letters page gave a concise description so the reader knows what’s going on.

The prose story continues to keep my interest. Conan now rescues his woman but is himself now a prisoner. Very interested in finding out more of this mysterious assassin out to get Conan.