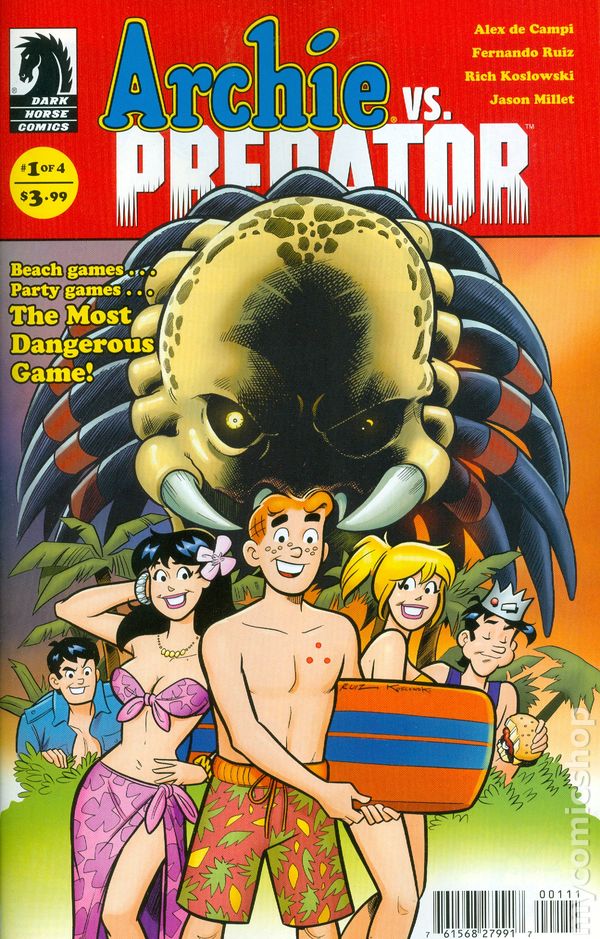 “When You Wish Upon A Star”
Writer: Alex de Campi
Artist: Fernando Ruiz

It is Spring Break in Riverdale and the gang wants to do something new. The rich snobs Cheryl and Jason come to taunt them of their wonderful vacation in the Caribbean. Luckily Jughead wins a vacation to a resort from his bag of chips. So the gang goes off to Los Perdidos. (Wow this contest is generous. He like brings along a dozen people.) One the guys is worried about getting his yearbook stuff done. Archie suggests a contest to find the best dressed girl. Veronica seems sure to win. Betty is upset but gets help from the evil Cheryl who with her brother has come around to lord it over the plebes. She loans Betty a Chanil which helps her win.

So this sets off Veronica and a catfight ensues. Betty gets her nose broken but worse Archie tries to stop the fight and ends up falling on Veronica. She kisses him and Betty runs off into the jungle crying. She thinks Archie doesn’t car about her. She wanders to a jaguar temple and inadvertently steals a knife. She gets back and Veronica makes up with her. They decide to go back home early. Oh and the Predator has landed and harvested Cheryl and Jason as trophies. He also has for some reason developed a fixation on Betty and Veronica.

A short one page backup story. Eight year old Sabrina is left alone with her cat Salem. Hellboy comes to visit the cat for some reason. The cat introduces the future King of Hell to the future Queen of the witches. Sabrina wants to play Legos.

When this first came out everyone thought this was a joke but this was a real thing. Another one of those wacky crossovers. Now I do have to wonder what the Hell would a Predator be interested in the gang from Riverdale. I mean they don’t seem the challenge that these aliens seek. So far the issue has been a very Archie-centric story. Most of it has the crazy teenage shenanigans that you would expect in an Archie comic. All the drama with the rivalry between Betty and Veronica for the love of Archie.(Never really understood that.) Jughead eating everything in sight. The snobby rich kids.

At the same time the Predator who has little screen time does still show that he is also in character. Namely skinning people and pulling out their skulls and spine. Both have very two different styles which really makes this two worlds colliding. Interesting to see what the hell the Predator wants with them. Definitely a kooky idea.

One thought on “ARCHIE VS. PREDATOR #1”