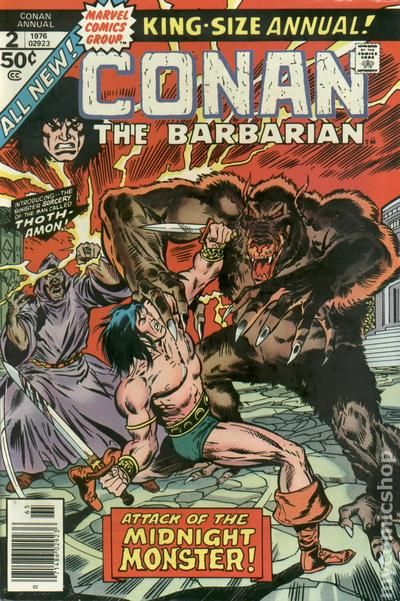 Ascalante is a nobleman who is planning to assassinate King Conan. His four co-conspirators known as the rebel four are Dion a noble who wants the throne. Gromel who aspires to command the elite Black Dragon regiment. Volmana a dwarf who seeks power and Rinaldo a mad poet. Ascalante has as his slave the wizard Thoth Amon who had his serpent ring stolen and had to flee Stygia.

The plan calls for the conspirators to attack Conan who will be alone in his chambers as the guard has been bribed to leave it unguarded. Thoth Amon is ordered to work with the fop noble Dion and make sure he doesn’t lose his will. While there he finds Dion has the serpent ring and Thoth Amon kills him and takes back the ring. With his new power he summons an ape creature to go and kill his former master Ascalante.

Conan meanwhile has a dream and is visited by the sage Epimitreus who warns him of the attack and puts a magical phoenix symbol on his sword hilt. He wakes and finds the conspirators entering his chamber. He attacks and shatters his sword on a helmet but then takes down an ax from the wall and starts swinging. He manages to kill most of his attackers when the ape creature that Thoth Amon summoned comes and kills Ascalante. Then it attacks Conan and his ax is useless against it. At the last moment he grabs the shattered sword with the magical phoenix symbol and that kills the beast.

So the second annual was the first annual to have new material. Roy decided that was the perfect place to adopt the very first Conan story. It was originally a Kull story “By This Ax I Rule.” It was rejected so Howard rewrote it with Conan and added the wizard Thoth Amon. It proved a hit and Howard continued on a streak with Conan story after Conan story. This story was an enjoyable read with a savage Conan taking on his attackers and a mysterious magical beast.