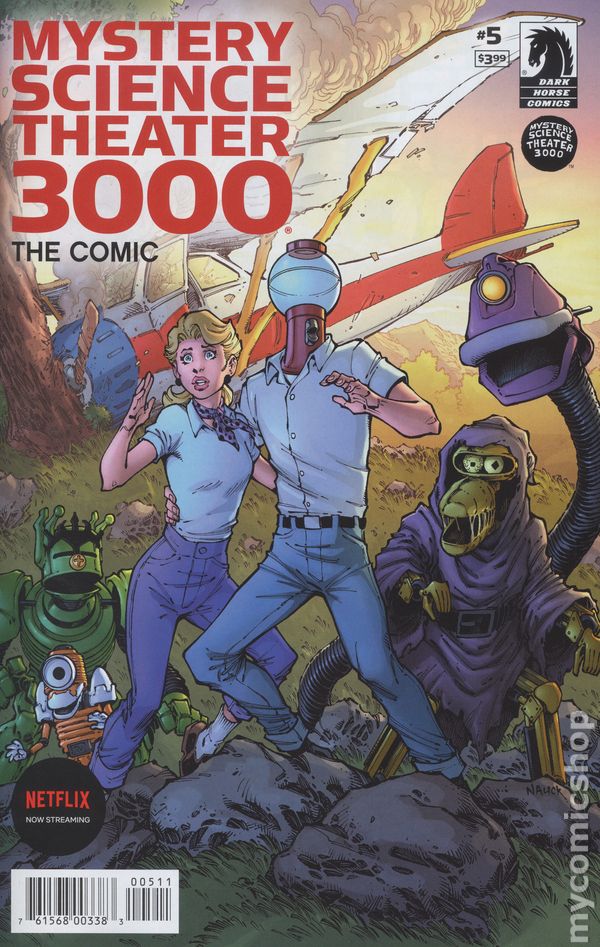 Synthia has build the Rover Extruder. This device will get Crow and the other bots out of the kitchen they are trapped in. So it creates bubbles that take them out. Then we can get back to Tom Servo Teen Reporter. Last we left Tom he was on a plane with teen starlet Shelley. They crash the plane but some hick manages to call it in to the police which of course gets reported on the radio. The thugs who tried to kidnap Shelley happen to be hiding out in a shack and decide to try kidnapping Shelley again. So they find the two sitting around a fire and take them back to their shotgun shack in the wild.

In the Black Cat strip poor Chu’s son saves his father by throwing himself in front of him and taking the bullets meant for his father. This distraction allows the Black Cat and Jonah to kick ass on the thugs. They later stumble on the hiding place for the gems. Then we cut to a whole new story that has Jonah go to a carnival which ends up being a commercial for Totinos Pizza Rolls. Linda Turner is going with her father and runs into Jonah. Then she gets kidnapped by a disgruntled magician who wants her jewels.

Crowkeeper narrates a story of a castle where the Lord of Mader would kill people in the iron maiden. A descendant wants to turn the castle into a horror museum. He finds a dead body in bed and has the servant help him get rid of it. Then pushes the servant down the stairs and for some inexplicable reason the whole castle blows up.

Well another comic in the saga. This one was full of groan worthy puns. The stories were also very incoherent and disjointed. Which makes for a perfect comic riffing experience. One more and Kinga will have a mini-series.