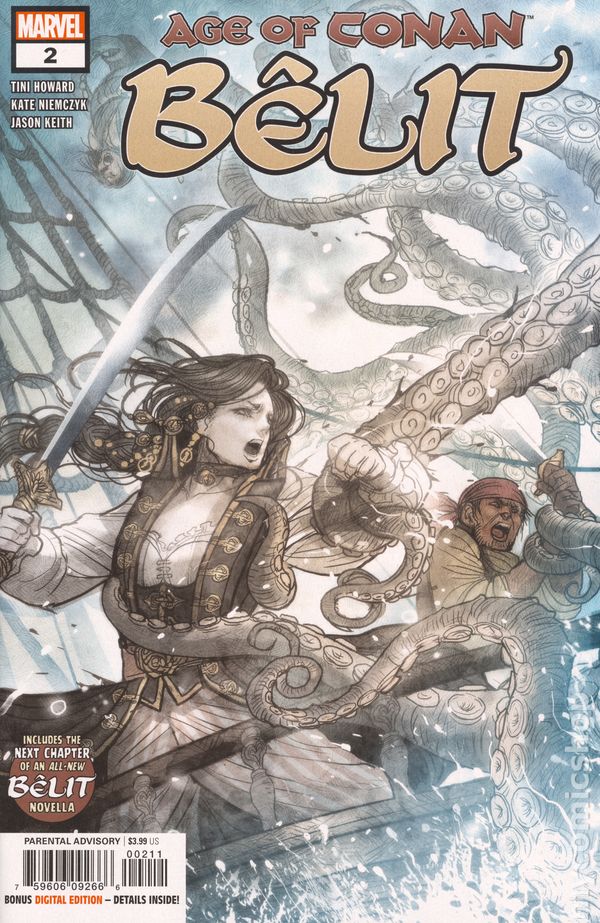 A sea monster is attacking the ships. Belit takes action and jumps to the Tigress. She has the crew man the catapults and start firing. This drives the beast off but it wrecks the hipster captain’s ship. Belit basically than takes over the Tigress. She has a plan and also takes action by altering the maps so the hipster travels back to the place where the sea monster was first encountered. Hipster captain is angry but when he hears Belit’s plan decides to go with it.

So the sea monster comes but they pour oil into the sea and set it on fire which kills the monster. Then they drag the corpse to the city of Barathan. Belit offers it’s queen that they can kill sea monsters for a price. The queen shows that they can control the creatures by summoning one.

N’yaga tells Belit that they must go to the island of Knefetalla. He can’t use the bones to pinpoint where the Codex is for fear of alerting others of their intentions. Belit comes up with having N’yaga pinpoint a location that will point them in the right direction. He does this and it is in open waters. They go there and find a ship and capture it. It was a ship that stole treasure from Knefetalla so they are on the right path.

Well Belit is showing that even as a young girl she is a leader. She already seems to be in charge and the prissy hipster captain and his androgynous first mate have already lost control of the situation. So far she has shown that she knows what she is doing. Although her scheme to get hired to kill monsters has run into a snag.

The prose story is proving to be a well done story. Its well written and exciting with vivid fight scenes and a plot that fits well into three pages of story.