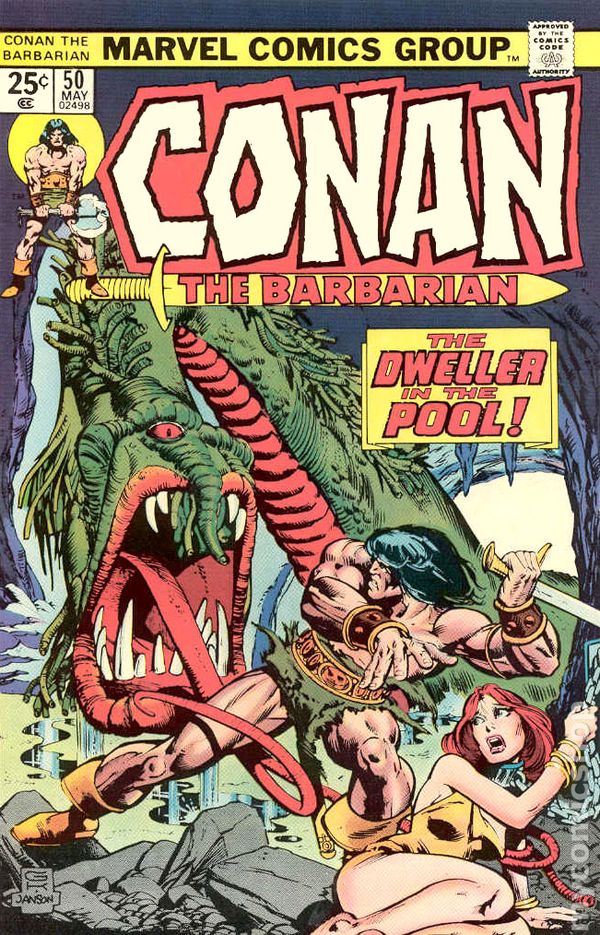 Conan is confronted by Pthassiass a giant creature that lived under the pool in the garden of Torkah Moh. Pthassiass knocks Conan into the carnivorous plants. While chopping them as they try to eat him, Conan notices that Pthassiass is scared of the plants. After the creature eats the serving wench that guided Conan, he manages to stab it in the neck and it collapses in the plants which make short work of the creature.

So Conan rescues Stefanya and takes her to Lupalina the wolf-woman. Lupalina recognizes Stefanya as the daughter of Chrysala the wife of the regent of Phalkor. So she tells the story of how in her youth she helped the wizards kill Stefanya’s parents so that general Themas Herklar could assume power. Lupalina took the baby Stefanya and gave the wizard Zoqqanor to raise. She then uses magic to see what is happening in Phalkor. The wizards have overthrown Themas and placed Unos on the throne. Unos can shoot lasers from his eyes.

Lupalina uses her magic to transport Conan to the dungeon to rescue Themas but is too late for he dies. Then Conan has to fight the demons that guard the dungeon. He is transported back to Lupalina’s hut. There the three decide to overthrow Unos and the two wizards.

The big 50 issue. A milestone for a series to reach that number. They didn’t have any special issue but continued with the story. And what a story. As you can read there was a lot going on. From lake monsters, carnivorous plants, to a guy that shoots lasers from his eyes. Seems a bit over the top but it flows smoothly. So we get some background for both Lupalina and Stefanya. Roy really does a good job of adapting this book into a Conan story. It feels like something that Howard would have written and is filled with many exciting twists and turns. Looking forward to the next fifty which gets even better.