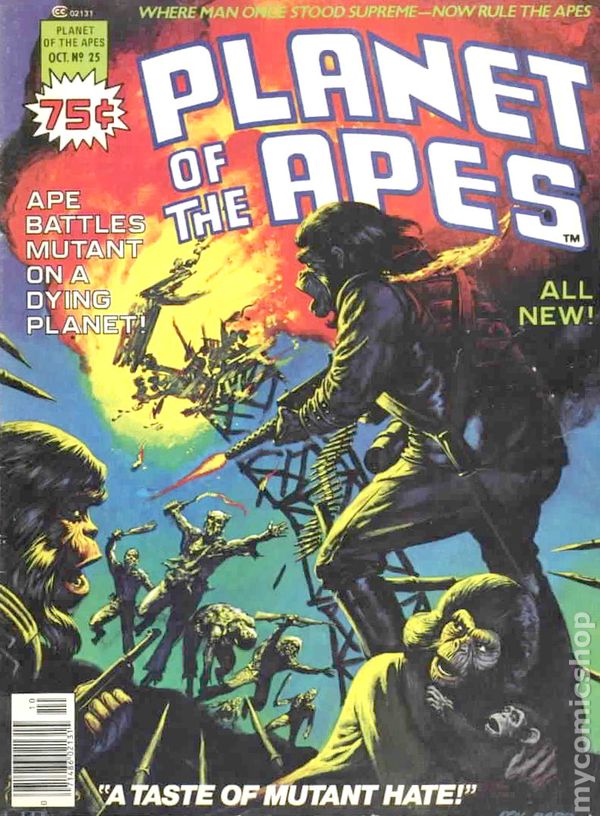 Caesar, MacDonald and Virgil are now trying to leave the underground bunker after finding the archive tapes of Caesar’s parents. Only they have to fight the various mutants. Caesar goes through a very hot radioactive room and manages to ambush the mutants. Then the three get out and head back home. At a council meeting Caesar tells of the mutant threat and that apes must form some sort of defense. Aldo and the gorillas are angry that humans are brought into the council and leaves. In the city Breck gets a report back from a scout of the location of the ape settlement and prepares to attack.

“A Catalogue of the Apes”
By Steve Clement

An article about the various merchandise available from the apes franchise. He goes to various stores and finds all sorts of stuff.

Aldo is preaching to his gorilla followers that they must seize power from Caesar. Cornelius Caesar’s son overhears this while playing around in the trees. Aldo tries to catch him and cuts the branch he was on. It falls and seriously injures Cornelius. Breck leaves on an expedition to destroy Ape city. He leave Mendez behind with orders to use the bomb if he fails. Along the way a scout is attacked and three gorillas killed. Aldo uses this to seize power.

So in this issue because of some sort of screw-up we get two installments of the Battle adaptation. It is mostly like the movie. Some major differences are that Caesar gets a high dose of radiation and starts to lose his hair and get sick. The mutants are more dumb and crazy than in the movie. Otherwise it follows the script. As for the article it was OK. Kind of fascinating to see that apes merchandising was still going strong back in the seventies.