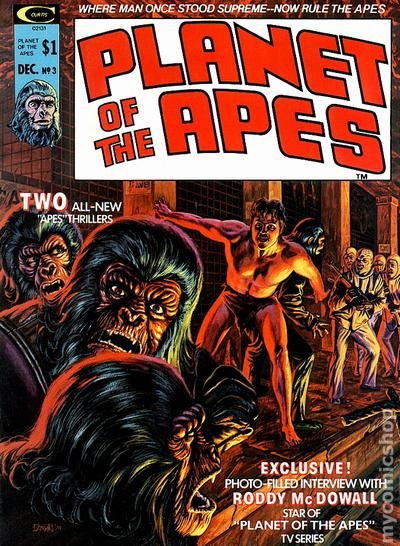 Jason and Alexander are caught between the mutants and Brutus’s gorillas. Fortunately for them they manage to have the two groups fight one another as they slip away. They go further into the underground complex and hijack a rocket rail car. They are captured and brought before the Gestalt. Several giant brains in glass jars. One talks with a poetic rhythm. Another like a thirties gangster. The Gestalt sentences them to die in the arena. There they are joined by a surviving gorilla from the ape supremacists chasing them. They join forces to fight off the various mutant creatures set against them. They manage to escape and find the Lawgiver a prisoner. The Lawgiver leads them to a flying rocket ship and they escape. But the gorilla then pulls a gun and takes over.

“Journey to the Planet of the Apes”
By Chris Claremont

An article about a visit to the set of the Planet of the Apes TV series. They are shooting the episode to simulate an earthquake and shake the cameras. He talks about how the ape makeup is always needing work in the hot summer temperatures and one funny time goats were interrupting the dialogue of the actor.

“McDowall: The Man Behind the Mask”
By Samuel James Maronie

An interview with Roddy McDowell who has appeared in four of the movies and stars in the TV series. He talks what attracted him to the roles and working conditions with the makeup.

Taylor is explaining where he came from to Zira and Cornelius through writing. Zaius comes and orders the human back to his cage. Later an ape comes to take Taylor for gelding. Naturally Taylor knocks him out and tries to escape. He is chased throughout Ape City and interrupts a funeral. Finds his companion Dodge now a mounted head in a museum and finally captured and hoisted up in a net. At the end he utters “Get you stinking paws off me, you damn dirty ape.”

So this issue is another enjoyable one. The terror storyline is the most interesting and handled well. Their is humor with the weird Gestalt minds. They have some exciting adventures, find the Lawgiver and manage to escape. Ends though with the gorilla that works for Brutus taking over. This series was the heart of the apes series and I think what contributed to its success.

The article and interview were also enjoyable and informative. Finally the movie adaptation comes along faithfully adapting the movie. It does have Dodge head mounted on a wall instead of his whole body stuffed. In some ways I think that would have been a more effective way to portray it in the movie. Of course we end with the iconic lines. An interesting note is a letter in the letter column from J.M Straczynski the future creator of Bablyon 5 when he was still a college student.