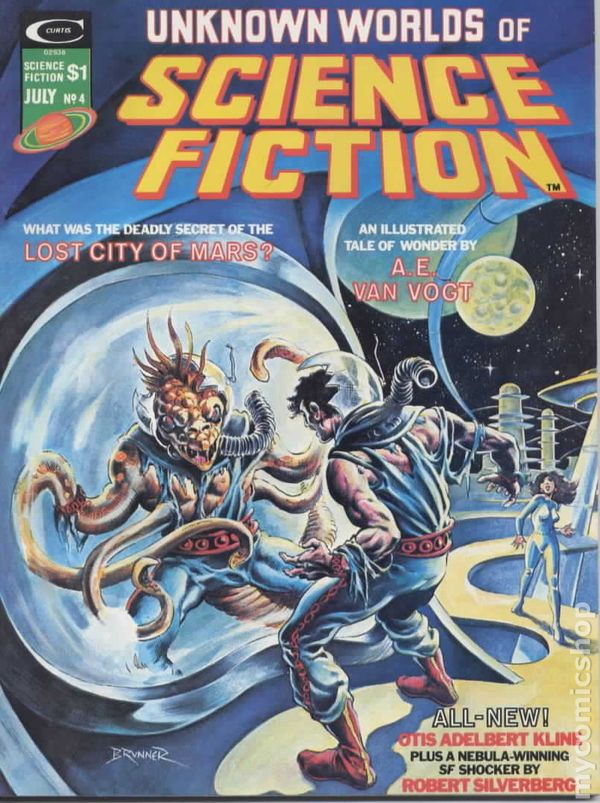 Sandson O. Tyme is getting ready to close up shop when a figure comes and teleports him to an inquiry of the Tribunal of the Universe. They are concerned about Slow Glass and want to find out if its a threat. They find that a mysterious being gives him the supply. In the end they find no threat and he is returned to Earth. In fact the constable is the one supplying Slow Glass and plans to use it to overthrow the Tribunal.

The only survivor of a crash on Mars wanders for water. He comes on an isolated village. It is automated but the food is no good. The shower uses some type of poison instead of water and the beds are heated rock. The village was designed for the Martian inhabitants. The survivor tries to force the village to adapt to help him survive but the village instead changes the man into a native Martian.

A conversation with the author about were he comes up with his ideas and views on writing.

An article on a pulp writer from the thirties. He did his own space opera series about Mars and Venus.

“A Vision of Venus”
Writer and Artist: Tim Conrad adapted from story by Otis Adelbert Kline

A scientist has been able to make a psychic link with a warrior on Venus. Lotan is tasked with recovering a rare fungus on an island. He finds a woman in distress and rescues her. The woman has the fungus in her shoes and Lotan can become rich and nobility so asks her to marry him.

An article on upcoming conventions and some newly released books.

Some friends in Rome discuss the selection of the new Pope. A robot is one of the candidates and they debate the wisdom. The bishop and rabbi are for it. The new Pope is the robot now named Sixtus the Seventh. He blasts off at this inauguration.

An alien race of gnomes has invaded the Earth. A soldier is captured and taken to their planet. With the help of his commander also captured they manage to fight their way back home.

“Kick the Can”
Writer and Artist: Bruce Jones.

Two childhood friends that were rivals for the same woman meet on a hunting expedition to an alien world. They try to kill each other over the woman but the woman is killed.

This was another enjoyable issue filled with mostly good solid Science Fiction adaptations. My favorite was the Vogt story but the Kline and Adelbert ones were also interesting. I would like to check out Adelbert’s stuff. It is very ERB and sounds fun.

Kick the Can was also a solid story about two guys and their rivalry since childhood for a girl. Very believable. The Slow Glass starts to have some more depth to the story with this plot to overthrow a tyrannical ruler of the universe.

The only one I didn’t care for was the Encounter at War. Very confusing with them being captured and rescued by some lizard-man. Very little dialogue so never had a clear picture of what’s going on.