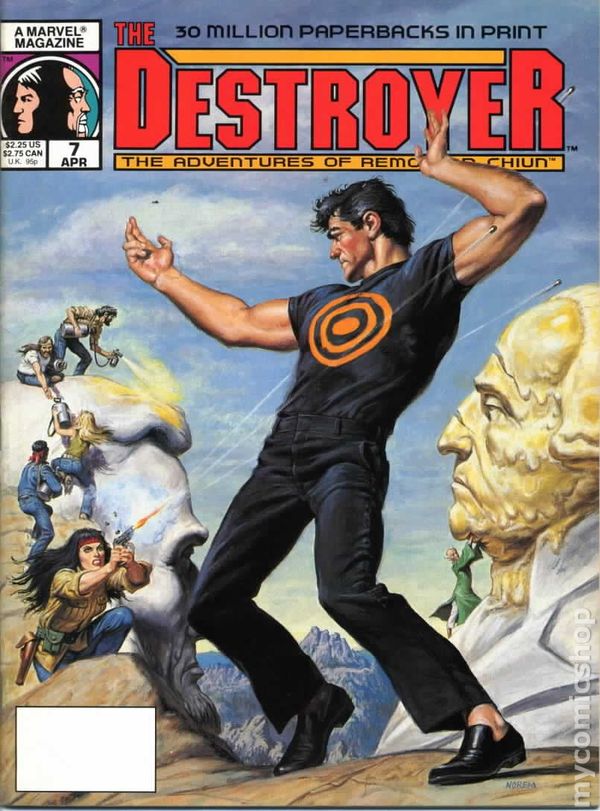 In the jungles of Peru a college activist meets with the Shining Path rebels. Things aren’t going good for the Maoist world revolution. Recruitment is way down. The activist only collected $69 dollars to give them. That is after the airfare for our college activist. While here the guerrillas give her a juice from a leave that causes stone to liquify for a brief period of time. This will be used to strike back at the corrupt Capitalists and wake up the people to the need for a revolution.

So they use it on the Statue of Liberty only it just turns the base to mush. Didn’t work on copper. Seems the C.Y.L.T Communist Youth Thought League didn’t know that copper isn’t stone. They haven’t been going to class and their leader orders them to start so they know stuff. Here Remo and Chiun try to infiltrate the group. Remo says that Chiun is the twin brother of Ho named Ho Chi Mung. The dolts believe him but it all falls apart when Chiun takes exception to him being recognized as Vietnamese and not a Korean. Luckily Remo gets him out of the way by reminding him is soap is about to start. Later Remo finds out they are going to attack Mount Rushmore.

Remo and Chiun find them spraying the juice on Washington then Lincoln. Chiun and Remo manage to hold up the images from sliding down until they solidify. Then they chase the commies onto a ledge where Chiun goads them by disparaging Mao. This gets them mad that they lose their footing and fall to their deaths.

Well this was another funny story. Now this was a ridiculous satire back in 1990. Sadly there are Antifa thugs out there that think just like this. Universities are just popping these dipshits out like an assembly line. I think the guy who wrote this didn’t realize how prescient he was. I really do love this series. I must check out the books sometime.