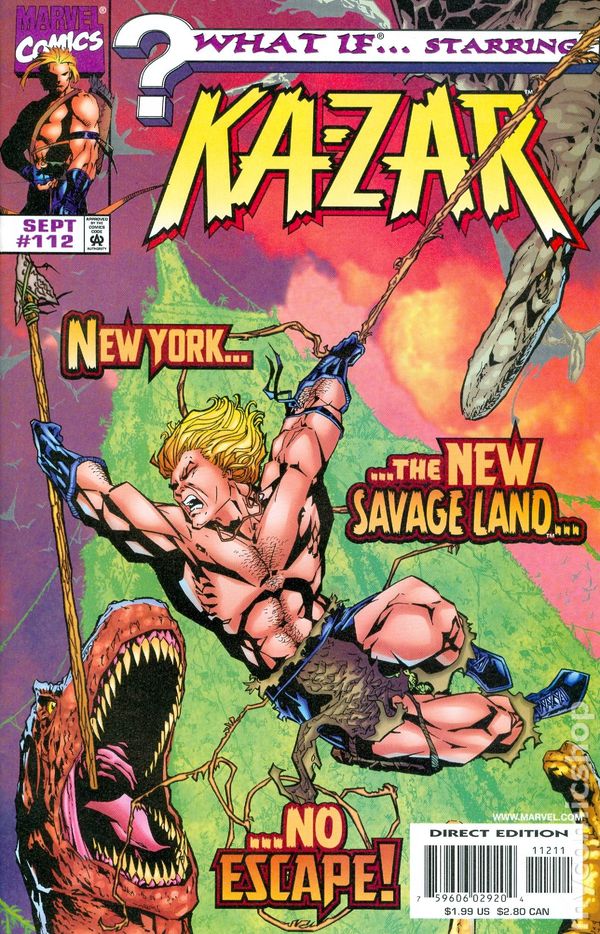 It this alternate timeline the medallion Ka-zar used to get into the terraformer was destroyed by Parnival. Thanos succeeded and New York is now a jungle. It has been five years and Shanna has been alone in the jungle that is now New York. The surviving Avengers lead by Hawkeye are battling a T-Rex. The T-Rex is killed by a returning Ka-zar. He wears the skull of Zabu who died. The two get a visit from Parnival in a hi-tech suit. Parnival has been hiding out in a bunker but the supplies are out. He needs Ka-zar and Shanna to help him destroy the terraformer.

Parnival secretly planted an explosive in the terraformer only the remote control didn’t work. So it has to be detonated manually. The trio go through the subway and battle a herd of raptors. They make it to the terraformer but the explosive must be detonated by two people. The explosion will kill the two. Ka-zar and Plunder volunteer and Shanna makes it to safety. The terraformer is destroyed and New York is restored. But the city wasn’t the only place effected. The whole world was terraformed and only New York is now restored. Shanna promises to go after Thanos.

I love What If and how it explores an alternate outcome. In this instance it is Thanos succeeding with his terraformer. So New York and the world is one savage jungle. Most of the heroes are dead but some like Hawkeye and the Punisher have adopted. I kind of found it a little creepy that Ka-zar would wear the skull of Zabu. I mean I wouldn’t wear the old bones from my dog. Still an enjoyable story that had Parnival redeem himself.