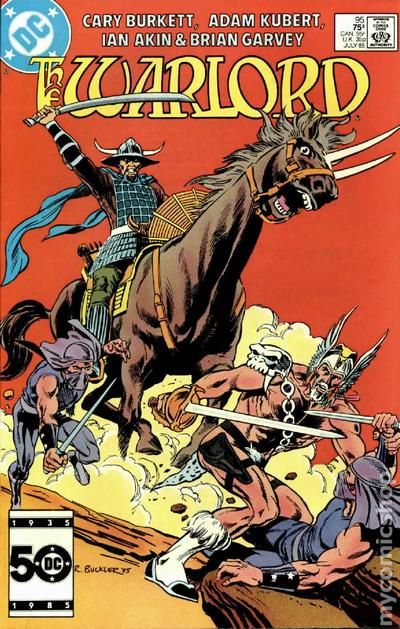 Morgan and Shakira are trapped in front of a waterfall. A Vashek assassin jumps on them and knocks the three over the falls. Morgan and a pissed Shakira manage to survive the fall and continue on the trail of Hawk. They catch up to him and Morgan is ready to fight him but the Vashek assassins show up. It looks grim as they are surrounded and outnumbered. Luckily the knights of this island come riding to the rescue on huge tricorns. They send the Vasheks packing. Taken to the lord of the island they find he is grateful for the return of the petulant princess. He gives Morgan a gift of the tricorn steeds and Hawk two chests filled with gems. Lord Kaldustan would pledge his knights in Morgan’s fight against the New Atlanteans but the sea dragon that attacked them last issue terrorizes the island. Morgan has a plan and with Shakira and the greedy Hawk who is promised two more chests they set sail. A giant crossbow with a diamond tipped spear. Things don’t quite work out as planned but the sea dragon is killed. At the end Morgan is back and gets his people that Hawk freed. Hawk gets his gold and also steals the chest of gems that was given to Morgan.

Looks like Burkett has a love of things Japanese. The Vasheks are clearly ninja inspired. The island that Morgan found himself on had a very Japanese flavor to its people and culture. The knights looked like samurai and bushido and saving face were clearly in their culture. The Vasheks were shown that they could be defeated. Morgan gains a new ally. Hawk the greedy scoundrel makes off with more wealth than he deserves. Oh and the Evil One gem was stolen and everyone thinks its Tinder. This all sets up events for the next Warlord annual.