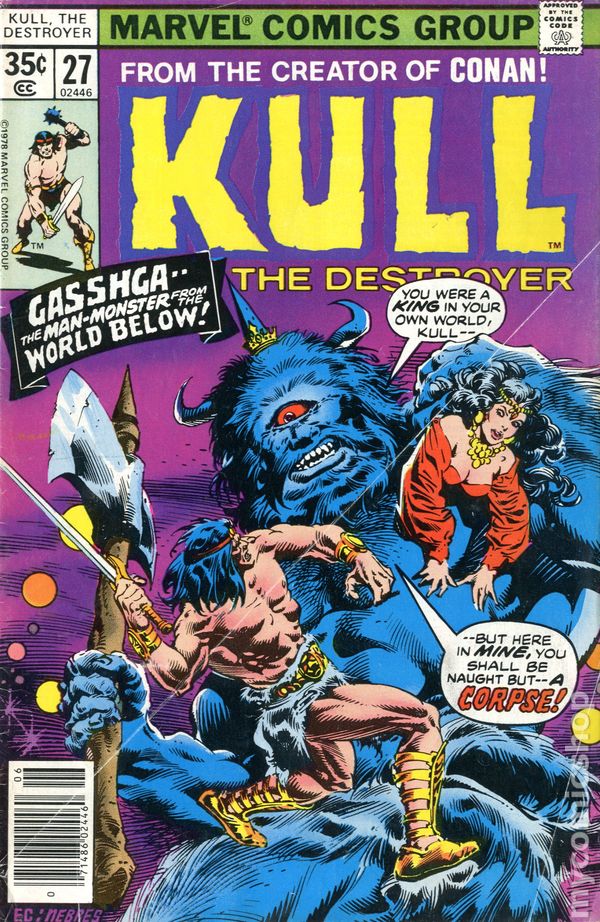 Kull and Ridondo are climbing a cliff to the monster’s castle. They have to fight off a giant lizard that is climbing up after them. Fortunately Kull knows what to do and tosses a huge boulder on it. Meanwhile Lorelei has become the captive of the monster named Gasshga. She is rightly terrified but Gasshga seems an easy going talkative sort. He is interrupted by the giant lizard from before that has entered from an underground passage. He fights it and comes back exhausted and tells Lorelei his story. Kull and Ridondo use the same passage the lizard used to get in. They come upon the sleeping Gasshga and Kull is about to plunge his sword into his heart. Lorelei comes and stops him. The noise also awakens Gasshga who is looking for a fight.

This issue was OK. I mean there wasn’t a lot really going on. Kull and Ridondo have a lot of snarky comments between them as they search for an entry to the castle. Lorelei does a lot of cowering with Gasshga. Kull and Gasshga fight the same giant lizard. At the end Lorelei seems to have Stockholm Syndrome since she is siding with Gasshga. Oh and Gasshga is awake and looking for a fight so the next issue should start out with a bang.