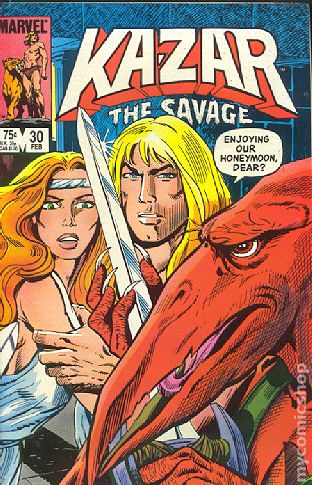 Ka-zar and Shanna are now officially married but have no time for a honeymoon. They are soon taken prisoner by the allied forces that attacked the Aerie. Ka-zar is fitted with a helmet that he can’t see or hear and given a sword. Then placed in an arena. Shanna is placed in the arena and two Tublanti guards are attempting to force her toward the blinded Ka-zar. Shanna is too smart and instead lures the dumb clods that the Tublanti are into Ka-zar and they are killed.

Then Dherk comes and frees Ka-zar. He is now finally free of Belasco’s control. They free Zabu and the Aerieans and the fighting starts anew. Just then the Botorese join the fight. They were brought by Leila only her people haven’t forgiven Ka-zar for the perceived death of Mele. So they start to question why they are in the fight. Ka-zar decides to threaten the unconscious body of Leanne to force the sides to stop fighting. It is agreed that the fighting will end but Ka-zar is banished from Pangea.

OK so this is one free for all issue. All these sides are fighting. Dherk is first against then with Ka-zar. I loved the way they tried to have Ka-zar kill his new wife Shanna. An interesting idea but still not good enough to do the job. A very fast paced issue with an ending that finds peace at the price of Ka-zar’s exile. Although the Pterons have not forgiven Ka-zar and still plan to exact revenge.