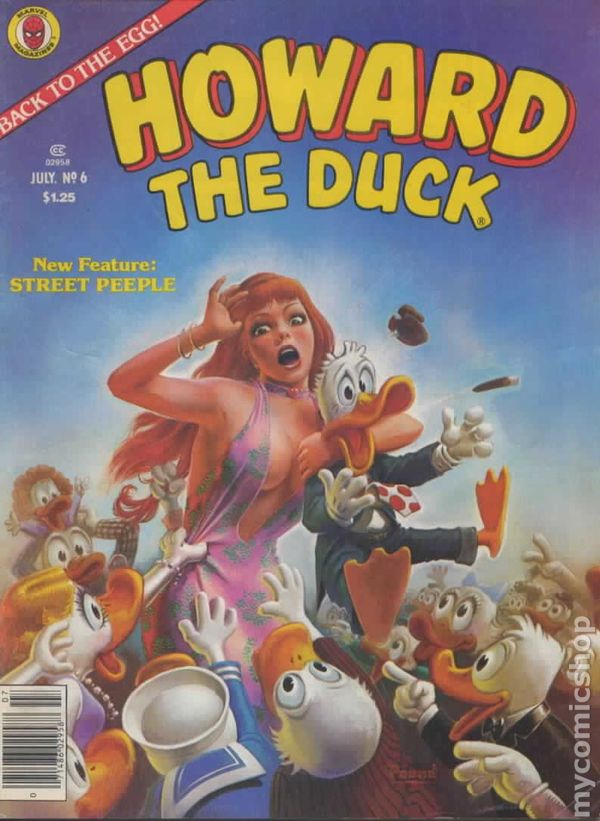 Howard and Beverly are going back to Howard’s home world of Duckworld thanks to Winda Wister’s ability to shift the cosmic axis. So the pair find themselves in New Stork City which was Howard’s old home. Naturally a big hairless ape attracts a lot of attention. What they weren’t expecting was that the ducks mob the two tearing off their clothes as sacred objects. The two manage to run away and hide out in an alley. They then go to Howard’s parents home.

The home is now a sacred shrine and a large crowd is gathered to hear the Reverend Ganter who heads the Witness of the Ascension Cult or WACies. A few years ago Howard was at Quent State University when an anti-war protest was fired on by the national guard. President Duxon was there and Howard was yelling at him when the cosmic axis shifted and brought him to Earth. Now a cult has arisen around the event.

Howard is not happy with the Reverend and reveals himself. He tells the people to start thinking for themselves which they do. Howard and Bev get on the Tonight Show with Johnny Quackson to tell their story. But the reverent Ganter has a plan and uses a guest to turn on a vacuum cleaner and tear off Bev’s clothing. It reveals her as a truly non-duck being and turns the people against Howard for taking her as a lover.

So with the help of Truman Capoultry the two find Duktor Strange who just happens to be a drunk in the alley to transport them back to Earth. They escape in time before Gander and his boss Uncle Scrounge MacDrake get to them. At the end they find themselves in a swamp with the Man-Thing behind them.

It is the sixties in San Francisco and three street jugglers are performing. Cheyanne, Qwami and Moonchild. A guy named Riff falls in love with Cheyanne and rescues her cat from a biker. He gets knocked on the head and the three take him back to their place.

So we get to see Howard’s world and it is one strange place. Back in the Playduck issue they had articles about the cult that arose from Howard’s disappearance so it was nice to see them incorporate that into this story. It would seem that a cult would arise from such an occurrence happening. This was an enjoyable story and loved seeing the world that is like ours except for intelligent ducks running it. Interesting that the big villain Uncle Scrounge MacDrake looks exactly like Scrooge McDuck. Now Disney was threatening to sue Marvel over Howard for looking like Donald Duck which is why the story with him getting pants was done. This was of course before the two entities merged so it seems a pretty risky move back then.

The Street Peeples backup is slated to be a regular feature for this series. Inspired by the sixties and real life people that the author knew. Frankly I found the whole story to be a load of shit. Just stupid beyond belief.