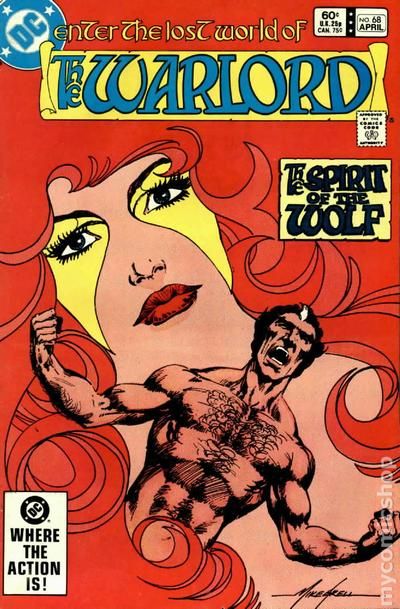 Mariah finds Rostov outside and tells him that Jennifer is ready for him. Thus we get a moment between the former lovers and shown their past. Rostov was Mariah’s fencing instructor when she was just fifteen. She grew into an Olympic gold medal winner. They fell in love but one night while Mariah was in Athens the change came over Rostov. He went to his grandmother and found out the truth of why he has this condition. When Mariah came back he drove her away because he knew that he was a danger to her and didn’t want to pass on the condition to future generations. He then traveled the world looking for a cure and found Mariah’s old colleague in Vienna Dr. Lakely. He tells Rostov of the fantastic world of Skartaris and then Rostov’s arduous trek to reach it.

Machiste comes and tell him it is time. So Jennifer uses her magic to separate the wolf from Rostov. A black wolf is pulled out of him and now will obey Rostov. Overjoyed that he is free from the curse he makes a move for Mariah but Machiste will have none of that. Mariah objects to being fought over and will fight Rostov instead. So they fight and Mariah wins by cheating. This gets Rostov angry and his wolf attacks Mariah. He stops him in time and comes to the conclusion he is not yet free of the wolf and leaves with the wolf to wander.

Jinal is now in the city besieged by the Harahashan. She finds it a pointless war and goes to the council to advocate that they give her a chance to negotiate a peace. The council has no interest so later that night Jinal and Skinner come disguised as Harahashan and kidnap the chairman. Unfortunately they are discovered but mange to escape the city with their captive.

So Rostov is finally cured of his werewolf curse. This was a slow issue but had its moments. Obviously Mariah wanted Machiste. I mean you don’t fight the guy that you want to end up with. Rostov had some problems with taking no for an answer. Still Rostov was an interesting character. Grell and his successors though decided to never use him again so we are left to wonder what became of Rostov and his new pet wolf. It also marks the end of the Wizard World adventure.

The Barren Earth just keeps getting better and better. Jinal is attempting to broker a peace and goes to extreme measures to do it. She gets Skinner to help. Skinner is a kind of happy go lucky type of fellow. I really like the guy. There is also a rivalry developing between Jinal and Renna who clearly has a thing for Skinner and feels threatened by the blonde newcomer. This story is just awesome.