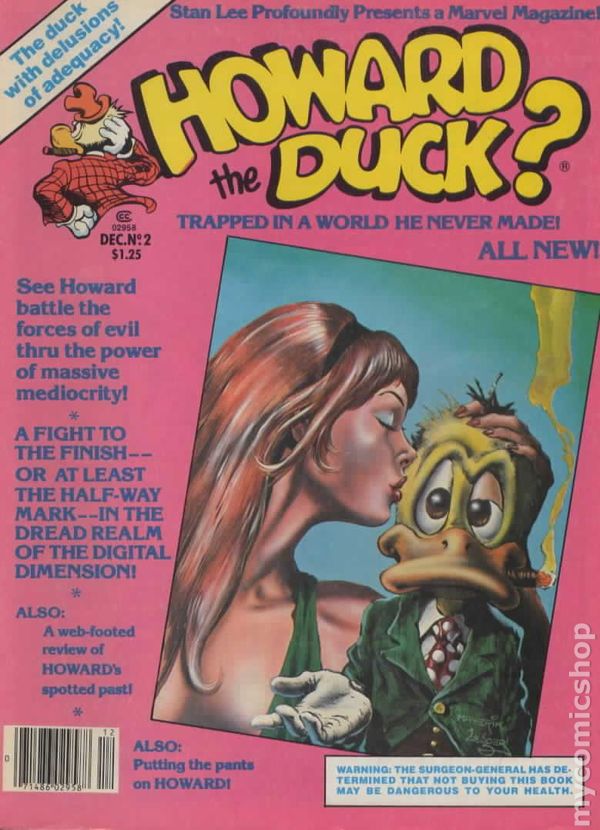 Howard and Bev come on a protest at a pet store in a popular shopping district. The protesters are protesting animal indecency. That animals are going around naked and not wearing any cloths. The protesters get real worked up when they see that Howard is not wearing any pants. So they chase him and Bev. They are rescued by the owner of a haberdashery Wally Sydney. Wally is a failed cartoonist who after WWI decided that he would start his own clothing line. His stores were successful but the seventies brought a complete change of style. So he hit on the idea of creating a movement to have animals clothed and so this movement was his idea. He threatens to tell the mob where Howard is if he doesn’t buy a pair of pants. So the dejected duck must now wear pants to escape the wrath of the animal decency mob.

Howard and Bev go for their debut in Dino Digitalis new movie being filmed at Union Station. They get there and find a bustling movie set. But when they go come from their dressing rooms in costume for Duck Rogers, they find the place abandoned because it was all a trap. Pro Rata The Cosmic Accountant from back in the color comic. He is looking for the Jeweled Key to the Cosmic Calculator. If he doesn’t get it the auditors will repossess his magic and put him in debtors prison. Unfortunately Howard hocked it. This gets him angry and he animates the breakfast special to go after the two. So Howard and Bev have to fight the Eggs-men. Living eggs, bacon, toast and coffee. All of this in the universe that Pro Rata created. Howard and Bev are flying a toy rocket ride that needs quarters against Pro Rata’s flying cash register. Luckily the two manage to defeat Pro Rata as the auditors come and take him away.

The second issue is as weird as the first. There is a lot of sly humor in this series. Fundamentalists on the march against animal nudity. While very weird is is also visually stunning. The weird world that Pro Rata creates is a treat of look at. I have to say that this series does intrigue me. Plus it is so seventies which brings a little nostalgia from my childhood.