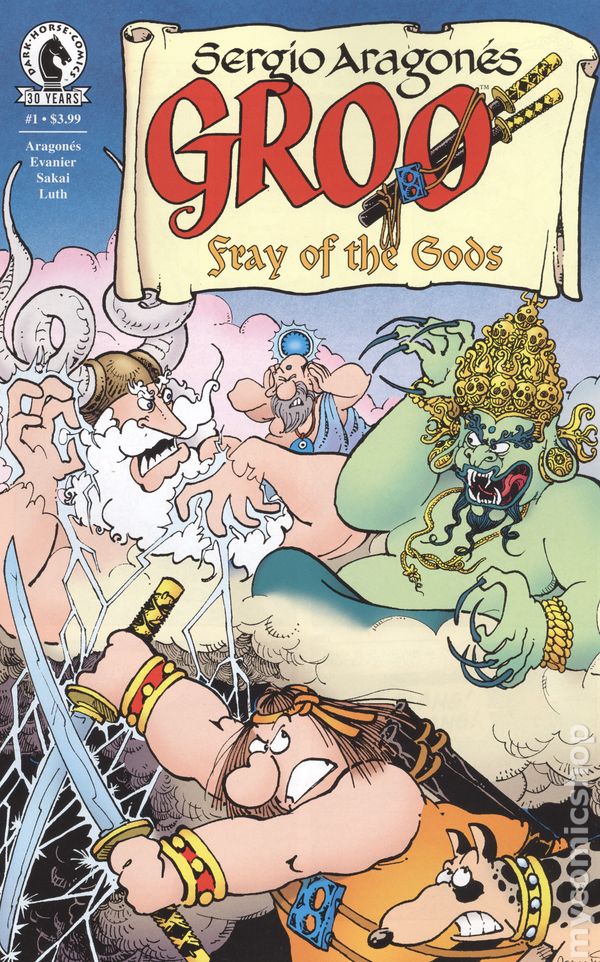 Groo and Rufferto are wandering as they always do when they come upon a village. This village has no men. They are fighting over the hill. So Groo jumps into that fray with wild abandon. One of the fighters asks which side is he on. For the two sides are fighting over their one true god. The fighting stops because monks have come to pray. Groo then chases them off so the fray can continue. Unfortunately the soldiers have also had enough of Groo and run away.

So Groo finds another village. This one the men are building a temple to their new god. The new king Cuffi has declared himself a god and forces his subjects to build the temple. When the men find out they have Groo they convince him to fight the king’s army which Groo is very enthusiastic about. So the mob marches on the king and Groo lays waste to the army. Meanwhile Cuffi who calls himself the Star God has come among the other gods in the clouds. He wants to be accepted but the other gods just laugh. They point out that nobody truly believes in him and anyway Groo is wiping out his army so he has no way to compel belief from his subjects.

The new Groo series takes on religion in a whimsical and funny way. All the gods exist because of belief in them by people so in some way they owe their existence to the common people. Anyway the gods are probably in for a surprise since I doubt that even they will come out unscathed by Groo.