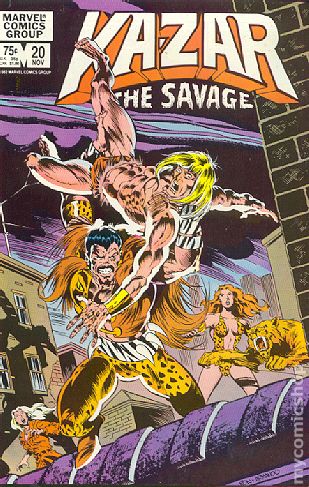 Ka-zar is still wandering New York and fighting off punk hoodlums. Ramona Cortland breaks out Kraven to track down Ka-zar but Kraven goes rogue and decides to kill not capture him. Ramona had the good sense to put a tracker on him so she follows him with a rifle. Shanna has no luck with the police and goes out to search herself. Zabu pretends that the drugs given him are working. Then he strikes and manages to lock his captors in the cage as he goes free to find Ka-zar. Kraven finds Ka-zar and chases him all over the place. Ka-zar is too weak and knows the bullet in his head could easily shift. The story ends with Kraven, Shanna, Zabu and Ramona all converging on the roof that Ka-zar is on.

This was a fun story. Ka-zar gets some of his memory back. Kraven is not a reliable team player. Zabu is one smart kitty who turns the tables on the dumb zoologist giving a tour to a group of reporters. There is a lot of humor in the issue. They crash into a comic book convention and we get a cameo of the writer and artist. Some other incidents are a 3-D movie screening that has Zabu jump out of the screen and the policeman who really wants a ham on rye. There is some truly touching moments as Shanna reflects on her relationship with Ka-zar. A great story with a cool cliffhanger ending.