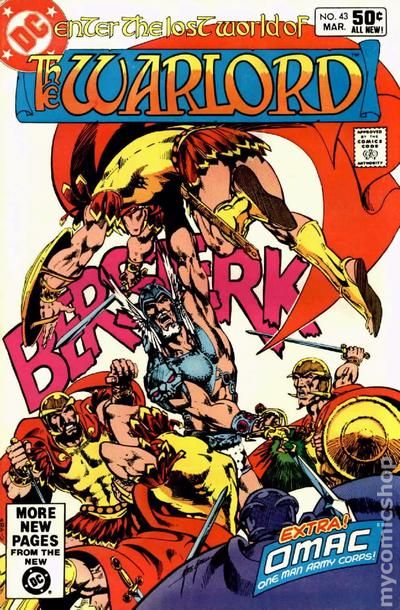 Morgan has made it into Shamballah but finds out that Tara has been captured by the Therans. Also his laser rifle is out of juice. So he decides to bluff. He will have a force of five hundred men stripped of armor swim through the flooded computer complex under the city and outflank the enemy. Meanwhile he distracts them by going out and proposing a deal. Single combat between Morgan and the Theran’s best man. The winner take all. So Morgan has to fight a four armed mutant. He drags out the fight until his men are in position. Then he dispatches the four armed mutant and frees Tara. The two fight in the epic battle. Morgan falls under the spell of the Hellfire sword and becomes a killing machine to sate the sword’s bloodlust. A young Theran soldier surrenders and Morgan is about to dispatch him when his hand is stopped by Tara. He realizes that the sword has taken possession of his soul and throws it into a river. A hand comes out of the water and takes the sword. Later Aton arrives with a piece of wreckage from Jennifer’s ship. Tara smiles knowing that Morgan has a wanderlust that will never keep him by her side.

Omac fights Vanquisher on the roof as Vernon Brothers film it. Vanquisher is a pseudo-human and quickly runs out of juice. He eventually self-destructs but Omac is too powerful to be injured. Brother Eye traces the signal to a nondescript hotel down the block. Omac goes there and captures the triplet Vernon Brothers. IC&C manage to capture New York without a fight and end the war.

What an awesome issue. Morgan has to rescue Tara and defeat the Theran army. While he accomplishes that the Hellfire sword finally shows it’s malevolent side. There was always something evil about the sword. While a powerful talisman against magic it’s need for blood always made it a sinister force. The battle showed that Morgan couldn’t use it and keep his soul so wisely discards it. I also love the ending. Tara wakes up and listens as Morgan and Aton discuss Jennifer’s missing ship. Morgan notices and she gives him a knowing smile. Grell doesn’t give the reader any time to rest. After such a fast paced story he starts off Morgan on another quest.

The Omac story was good. A lot of action then Omac captures the Vernon Brothers. Not much plot but it does advance the story along. We wonder what the future has in store for Omac. All in all a great issue. It finally brings Morgan’s quest to a satisfying ending and also sets up a new one.