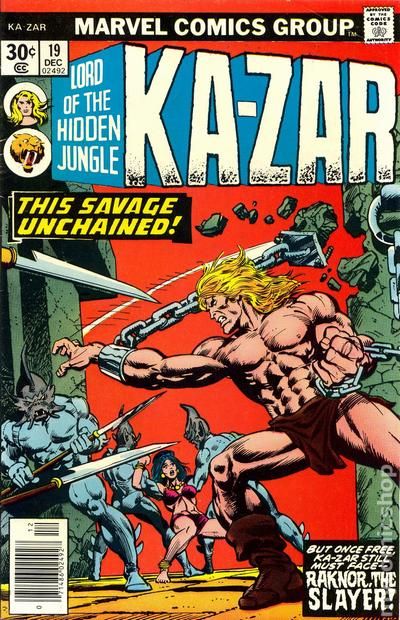 So Ka-zar confronts Raknor coming back from his trip. He is angry to hear that Ka-zar killed his son. Ka-zar manages to get in some good punches but his bragging makes him overconfident. Raknor knocks him out and takes him back to the city of Quarl. There Queen Tandylla is starting to overcome the Fires of Submission and assert her old persona of Tandy Snow. So much that her advisers want her to undergo another session in the Fires. So Raknor brings Ka-zar and wants to kill him which Tandylla still won’t allow. Ka-zar comes to and the second round he soundly defeats Raknor. Then he takes Tandylla and with his new found gnome friend attempts to flee the city.

So more drama with Ka-zar and the fearsome fish-men of Quarl. Tandy Snow seems to be coming out of her mind control. Some other threads flouting around are the invasion of the Savage Land. The Zebra men are mounting a resistance and Tongah’s wife has escaped. Tongah, Kloss and Zabu are succumbing to the mysterious old people who are stealing their live force. And Klaw and the green skinned invaders are plotting to re-invade the Earth. One more issue to the end of this Ka-zar series so stuff is coming to a head.