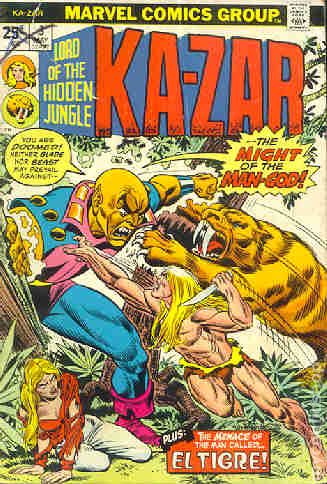 Maa-gor the Man-Ape survived the destruction of the red wizards castle and wanders off. He goes to the mystic mists which transform him. They turn him into a powerful being with intelligence and psychic powers. He is now Maa-gor the Man-God and he wants to use his new powers for conquest. First he mentally reaches out and contacts a criminal in South American called El Tigre. El Tigre comes to the Savage Land and together the two manage to defeat Ka-zar and enslave Zabu under their mental control.

Luckily Bobbi Morse was monitoring El Tigre and followed him to the Savage Land. She revived Ka-zar who goes off for round two. He manages to snap Zabu out of the hypnotism and both are ready to release a can of whopp-ass on the two villains.

So the writers decided to upgrade Maa-gor into a more powerful being. Probably a good idea since the man-ape was dumb as a tree stump. They also brought back Ka-zar’s old flame Bobbi Morse. The real exciting thing in this issue is a full two page map of the Savage Land. It shows the exact location in Antarctica. The land apparently has concentric rings with the outer ones inhabited by various dinosaurs and the inner one with a large inland sea where the human inhabitants live. A very handy tool to visualize where the place is and the local geography.