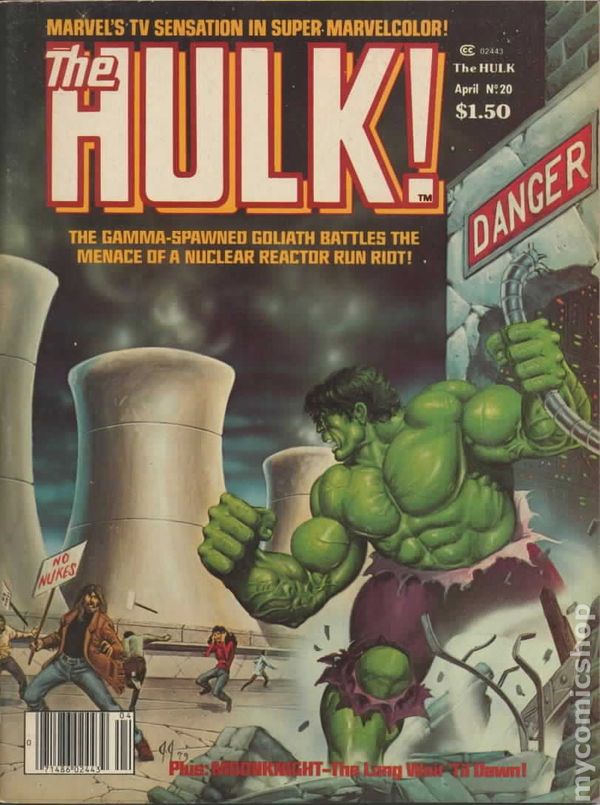 Banner is watching TV in a hotel when he hears of a nuclear accident at the Moneghan Point Plant in upstate New York. He knows an old associate who works for the N.R.C. and calls him to offer any help. The man is now head of the N.R.C. and is on his way to the plant and asks Banner to meet him. When he gets there his friend has a long winded press conference with hostile reporters and anti-nuke activists. After that they find out the problem is worse than reported. A mudslide has caused a collapse of a reactor onto one of the cooling pipes. After Banner is asked to brief the press he tells them that a full meltdown is very possible which causes a panic. The panic turns him into the Hulk. The Hulk has a vague idea to stop the meltdown. He breaks into the reactor and lifts the fourteen ton reactor off the pipe stopping the meltdown.

“This Man Tell Hulk What to Do!”
By Steve Swires

An interview with Kenneth Johnson the producer and creator of the Hulk TV series. He didn’t initially want to do any superhero shows but was drawn to the concept of the Hulk. He wanted to make it as realistic as possible and decided that what works in comics wouldn’t work for live action. An interesting interview and I do agree with how he decided to handle the series.

A collection of drawings of some of the women that Hulk has encountered with a brief biography. The women are Bereet, Hellcat, Red Guardian, Valkyrie, Casiolena, Jarella, Harpy and Moonstone.

Moon Knight leaves the hospital where his girlfriend Marlene is in critical condition. He wanders the city and encounters the people that populate it at night. A drunk doorman. A cabbie letting the air out of a competitors cab. A pimp and streetwalker. He rescues a junkie from drowning in a fountain and rescues a bag lady from a mugger. By morning he returns and finds out that Marlene will recover.

The Hulk story came out at the time of the Three Mile Island accident. So this is basically an anti-nuclear story with a lot of the preachy arguments against nuclear power. Not a real good story.

The Moon Knight story is the last that will appear in the Hulk. The series was so good that it got its own book. I will have to check that series out sometime. I really thought that the Moon Knight stores were the highlight of this magazine and were consistently excellent whereas the main feature is spotty like his issue. A backup that will be missed. This story ties up loose ends and was a very poignant and enjoyable ending to its successful run as a backup story.