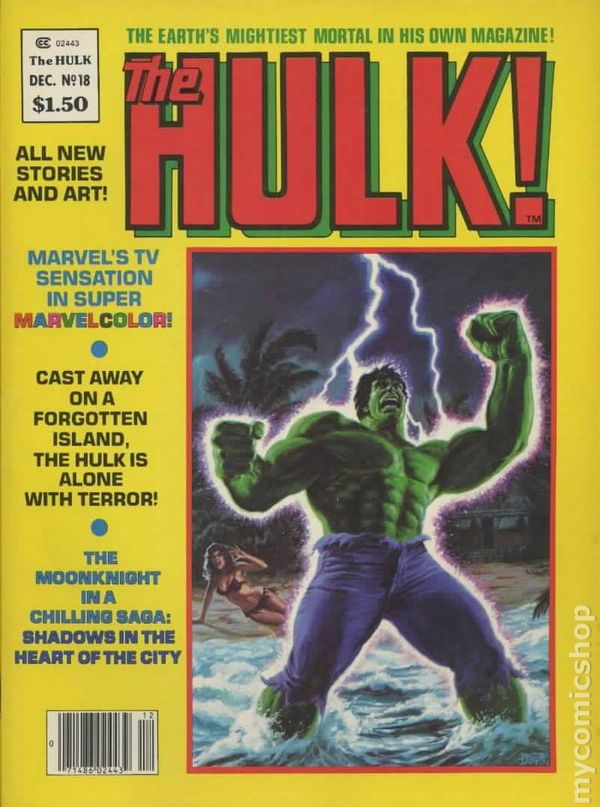 Banner once again turns into the Hulk while in a hospital. The Hulk confused and angry busts out and terrorizes the people in some African city. The army comes and accomplishes little except to made him even more angry. Having enough of people screaming and running from him or soldiers shooting at him, the Hulk takes off. He jumps to a horseshoe shaped island off the coast. The island is inhabited by an old man who having no money or prospects abandoned civilization to live out his live on the deserted island. Banner helps the old man build a place and seems to have found peace. But pirates come to the island and shoot a young tourist. The Hulk literally digs up the whole island and takes to back to civilization so the young man can get medical attention.

Moon Knight goes after his brother the serial killer Hatchet-man after he seriously wounds his girlfriend Marlene. The chase takes him through Central Park and he manages to save the life of another potential victim. A fight results in the Hatchet-man slipping and impaling himself on a tree.

This was a fascinating Hulk story. It was filled with a lot of pathos and hope. The old man’s story of where he worked all his life and forced to retire when he hit 65. He then loses his house because he can’t pay the taxes and forced to live with his daughter. Feeling useless he takes off on a ship and eventually finds the island. He is happy to live a carefree live. His story sounds very real and living on the island without dealing with the B.S the modern world throws at you sound very appealing. Also the full page of the Hulk knocking the island loose is awesome. A very laid back and interesting story.

The Moon Knight comes to a conclusion with his brother. Flashbacks to their childhood give the reader some understanding of how both brothers think and the rivalry that developed between them. As always the Moon Knight is a great and interesting backup feature.